Before I tackle “Tangerine,” a fabulous new micro-indie that was released on my birthday, I need to talk about another movie that was released during my birth year (cowinkidinks abound). The two movies bear more than a passing structural and emotional resemblance to each other. But first, indulge me to ask an essential question to titillate your philosophomasizing brains: can discovering an artist’s ethical failures cast an unshakable negative light on their work? For example, does finding out that John Lennon was a wife-beater who abandoned his firstborn child affect our enjoyment of “Imagine?” Can knowing that Roald Dahl was pretty much a Hitler apologist make us doubt the sense of poetic justice we felt as children reading his books? (Side note: if you’re interested in reading more about this stuff, check this out–I took an awesome philosophy class in college on the relationship between art and ethics and it really stuck with me.)

For many, the “obvious” answer is no; for others, it’s an uncomfortable yes. And for me, Spike Lee is one of those artists that, no matter what he does, is forever redeemable to me, thanks to “Do The Right Thing.” True, his most recent joint “Chi-Raq” has myself and many other Chicagoans questioning his intentions and decrying the movie just based on its loaded (no pun intended) title (and as someone who has campaigned for a shift from negative to positive media coverage of our city, I do take particular offense).

At the outset of “DTRT,” a few truths are made evident: 1) we’re in the city, 2) specifically, we’re in the hood, and 3) the forecast for the day is “hottttttt.” DTRT‘s trajectory follows several characters as they saunter, glistening with sweat, around brightly-colored corners of Bed-Stuy. People are constantly asking each other for money owed, or arguing over a few dollars exchanged. It’s a community divided sharply by culture and race, but unified by struggle. The score is full of soul, there’s vibrant cinematography and multi-layered sociopolitical themes, and it’s a complete travesty this movie got snubbed by the Academy in 1990.

Within the first five minutes of “Tangerine”–much like DTRT–some similar stark establishing elements are conveyed: 1) we’re in the city, 2) we are most definitely in the hood–though it’s sprawling L.A. and not dense New York–and 3) the aptly named Sin-Dee (Kitana Kiki Rodriguez), a trans sex worker fresh out of prison, is also out for blood.

Where the cast of “Do The Right Thing” meanders, the players of “Tangerine” careen. While it’s the peak of summer in New York, it’s Christmastime in LA (although that of course looks like summer, too). As soon as Sin-Dee learns of her fiancee/pimp Chester’s infidelities (the dual role here is important) during her hiatus from the hood, she is a woman on fire. She marches assertively on high heels through the concrete jungle, her choppy, layered wig twitching with every jerky turn of her head, utterly determined to obtain justice for herself. This involves confronting Chester directly, and/or the girl (“fish,” a trans-culture term for a cis-gender woman) he’s been cheating with. Sin-Dee’s best friend Alexandra (Mya Taylor) is a mostly unwilling accomplice on this quest, begging Sin-Dee to save everyone the “drama,” but she accepts following her around so she can advertise her upcoming singing gig at a music venue. “Don’t forget my performance at seven!” Alexandra yells in passing at a group of her trans frenemies while trying to catch up with Sin-Dee, already several steps ahead. This performance, by the way, is one of the only times the movie slows down, and it is poignant as all get out.

While the plot could potentially stand on just the shoulders of Alexandra and Sin-Dee and their wild journey together, it’s augmented with subplots that are just as meaningful as those in “DTRT.” One tracks the route of an Armenian cabbie who picks up lonely geezers, smarmy drunk dudes, selfie-obsessed girls (there’s a great moment when a pink-coiffed, twenty-something pixie takes multiple dumb snaps of herself and then stares up at the car’s ceiling as if she just felt the full weight of existential malaise collapse upon her), and trans sex workers like Alexandra–the latter, for more than just transporting them, if you catch my drift. His affection for Alexandra is actually quite touching, and we’re almost made to feel sympathy when he ditches Christmas dinner with his family to try and catch her gig, and presumably a little something else. His decision, however, leads to another, even more dramatic chase sequence and one of the most empathy-testing and arguably best scenes in the movie.

While it plays with your sympathies for various characters–again, like “DTRT”–“Tangerine” has no shortage of seamlessly artful social commentary that creates immediate compassion for these triple-marginalized people: for example, around midday, Alexandra is denied pay for her work performed on a super-slimy guy, and a police officer confronts the two who are yelling at each other outside his car. Alexandra states to the cop that they are disagreeing over a “business transaction.” The police officer chuckles, and Alexandra (and her disgusting client) knows she is trapped. We see just how easily and frequently sex workers can be mistreated with no legal repercussions, just because of the illegal nature of their work. 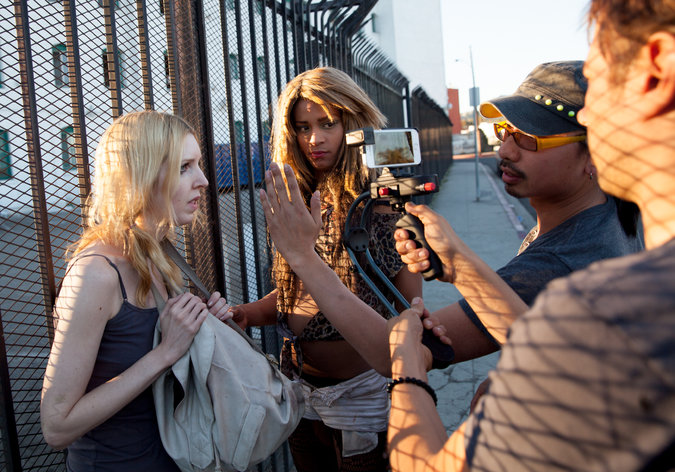 Perhaps the most viral publicity “Tangerine” has received, however, is based on the fact that it’s shot completely on an iPhone 5s (hey that’s my phone!) and it’s done extremely well. According to director/cinematographer/writer/editor Sean S. Baker, the choice stemmed from a simple lack of budget, but it seems almost intentional, like a populist statement that gels perfectly with the story’s subject matter. Some of the more complex shots include usage of a Go-Pro drone and the fancy “fast-forward” button (while crack den background music, Fatima Hajji’s “Up in Jam” blasts); “sweeping shots” that normally utilize a crane are a result of Baker riding his 10-speed in circles around the actors. The raw, rough style of filming is cleaned up by careful post-production, but it was still done on the cheap: Filmic Pro, an $8 editing app, allowed Baker’s team to adjust focus, aperture, and color temperature–which, as you’ll notice, was distinctly tangerine-y.

“Tangerine” is groundbreaking for trans sex workers of color, who seldom get their stories told. It’s empowering for broke young filmmakers, who begrudge the few capable of swinging multi-million-dollar budgets. And it’s enrapturing for anyone who’s not a part of any of these worlds–not just because it’s “taboo” or “exotic,” but because the characters in this world express the universal: righteous anger at egregious betrayals; desperate, irrational love for those who hurt us; deep, unconditional friendship that transcends (sorry not sorry) even the gravest (ahem) transgressions. If the ultimate message of “Do the Right Thing” is “people over property,” then the message of “Tangerine” is “friends over everything else.”

And ultimately, it’s a really, really good movie about girls. So, of course I love it.

“Tangerine” is available to stream on Netflix and watch On Demand.