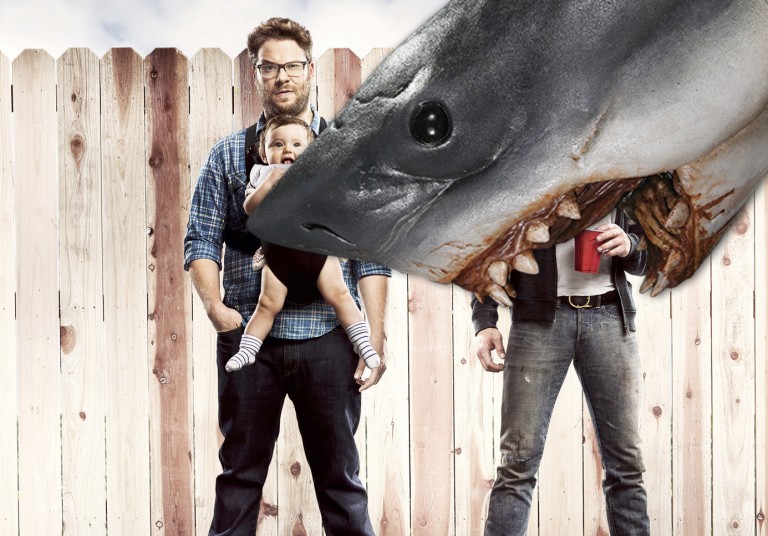 Filmcore’s Twitter was ON FIRE this morning, in a delayed reaction against some very distressing news for people who appreciate original cinema and bemoan the dearth of original content from the major studios. Sony Pictures, in the most creatively bankrupt move this side of re-booting “Spider-Man” for the THIRD TIME IN 15 YEARS (this will be the sixth “Spider-Man” feature overall, by the way — and the third origin story), is dropping a “Men In Black”-“21 Jump Street” mash-up movie. This is a fucking stupid, horrible idea, just more evidence of the Hollywood machine’s creatively bankrupt desperation, exploiting known properties for a quick buck. It’s also probably doomed to be a huge smash. Appropriately for this bold new era of franchise futility, Forbes is applauding the idea, because of course they are. So, with a little help from my friend Cameron McCumby, I’m concocting some of the stupidest movie franchise mash-ups imaginable. The catch is that the franchises being fused must belong to the same studio (e.g. “MiB” and “Jump Street” are both Sony). I bet half of them get made (we’re Tweeting the studios as we go), we’ll take 20% of the net please.

Disney:
–“Honey, I Shrunk The Avengers”
…And then I stepped on them and/or they gotten eaten by an assortment of red ants and grasshoppers.
–“Star Wars: Episode X – The Hulk Takes A Nap And Doesn’t Awaken”
Bruce Banner, after fighting Darth Vader’s Robert Smith-channeling grandson Kylo Ren to a draw (because it’s a contemporary franchise movie so there can never be consequences until you’re 73 and begging to be written out of the whole enterprise), escapes to Endor. Wandering through a foreste munches on some cambylictus berries, then finds an abandoned Ewok hut and retires for the night. Turns out the berries were rotten; hence, the Hulk vomits in his sleep and fucking dies choking on the bile.

Fox:
–“Alien Vs. Kevin McCallister: Lost in New York”
The Alien Xenomorphs stow away on a time-traveling freighter ship, arriving in present-day earth to terrorize a cracked-out Kevin McCallister. Kevin has been living off his father’s advertising fortune in a chic SoHo loft. Then the Aliens get lost during a day trip to Coney Island.
–“Alien Vs. Predator Vs. Family Guy”
Sigourney Weaver’s Ellen Ripley clone from “Alien: Resurrection” (Ridley Scott is making a new “Alien” movie, apparently sans Ripley) joins forces with Arnold Schwarzenegger’s Dutch from “Predator” and Danny Glover’s Mike Harrigan from “Predator 2” (Shane Black is making “The Predator,” and the Governator may return for it) to fend off the impending threat of Peter Griffin, patriarch of the loud-mouthed “Family Guy” Rhode Island brood. Oh, and there are some Aliens and Predators too, I guess.
–“Ice Age Beneath The Planet Of The Apes”
The digital talking monkeys’ genocide of the human race gets thrown out of wack when they discover a wise-cracking subterranean prehistoric universe, replete with digital talking wooly mammoths, digital talking sabre-tooth tigers, and digital talking sloths. Suddenly, it is a triple-pronged battle to the death, between the fake-looking animals voiced by Andy Serkis, the fake-looking animals voiced by washed-up comedians, and probably random white people.

Lionsgate:
–“My Little Pony Monopoly”
In which a mustachioed, top-hatted real estate tycoon buys every Technicolor pony on the market, driving the prices up to astronomic proportions, with no regulations in sight. Twilight Sparkle, oldest of the little ponies, twists an ankle and has to be put down via shotgun blast to the face. Yes, Lionsgate is still working on that “Monopoly” theatrical movie (from the writer of “The Truman Show” and “Gattaca” — oh, and “Simone”), and yes, they’re still going forward with that “My Little Pony” reboot (what a waste of Emily Blunt).
–“Madea’s Saw VIII: Breaking Dawn Part III”
God what I wouldn’t give to watch Madea brutally massacre the shit out of those little sniveling “Twilight” emo-vampires and emo-werewolves. Maybe she could do this to Taylor Lautner? If anyone’s opposed, speak now or forever hold your peace.

Sony:
–“Emoji Jumanji”
First off, yes, Sony is remaking “Jumanji.” Second off, yes, they are making an “Emoji” movie. Why not combine these two can’t-miss properties into one shiny new movie, centered on the now-widowed Bonnie Hunt’s purchase of a mysterious edition of Jumanji where all the pieces boast yellow smiley faces?
–“Angry Birdpussy”
The Angry Birds have aligned themselves with a conglomerate of international terrorists known as SMERSH (a rival of SPECTRE’s in the Ian Fleming Bond books, look it up kids), and have hijacked a device that would trigger a simultaneous computerized launch of all the nuclear devices on the Western Hemisphere. It’s up to James Bond to singlehandedly fuck his way to the top of the Angry Birds’ criminal organization.
–“The Magnificent Seven Barbies”
An oppressed Mexican peasant village brings together seven talking plastic toys with no private parts who promote unrealistic beauty standards to defend their town from heartless mercenary bandits.
–“The Really Amazing, Super-Incredible Spider-Man Books A Room In Hotel Transylvania”
In town pursuing the evasive Green Goblin, the Tom Holland-era Spider-Man gets into a bunch of wacky, CGI shenanigans when all the other hotels in Transylvania are booked. This compels him to holler at the titual Hotel Transylvania, where he meets Adam Sandler’s Jewish Count Dracula, and falls hard for his divorced vampire daughter, Mavis (Selena Gomez). Mavis is reticent to get involved with another human, so she turns him into a vampire during a night of passionate 69-ing. It’s kind of a rom-com “Space Jam,” but with Spider-Man and Dracula and Selena Gomez and no basketball.
–“Cloudy with a Chance of Ghost Rider” (shout-out to Cameron McCumby for concocting this particular awesome crossover)
Nicolas Cage’s unconvincing wig gets pummeled by oversized meatballs.

Universal:
–“Magic Mike XXXXXXL: Pacific Rimjob”
Guillermo Del Toro’s Kaiju demolish Tampa. Elsewhere in town, Channing Tatum eats out Olivia Munn’s asshole for two hours.
–“Neighbors 3D: Jaws The Revenge”
Yes, there’s actually a “Neighbors 2: Sorority Rising.” While on vacation in famed seaside resort Amity Island, frat bro Zach Efron is devoured by the great-grandson of Bruce the Shark (the Carcharodon carcharias from the original “Jaws”). Efron’s compadres Seth Rogen, Rose Byrne, Dave Franco and Selena Gomez again (they’re really trying to make Selena Gomez happen, you guys) set sail on the last yacht ride of their lives. In the film’s climactic showdown, Selena Gomez’s shredded spleen comes RIGHT AT US in JAW-DROPPING, HEADACHE-INDUCING 3D.
–“How The Pitch Perfect Grinch Stole Thanksgiving” — They’re already remaking the 16 year-old Ron Howard/Jim Carrey “Grinch” movie, an absolute debacle of a film that was a massive worldwide smash; the new version is scheduled to drop around Thanksgiving of 2017. They’re also gearing up for “Pitch Perfect 3,” because heaven forbid they use those talented actresses in a new movie that’s not a proven commodity. Why not bring those two wonderful continuations together, as the crusty green rhyming machine joins Anna Kendrick and the plus-sized Australian for Whoville’s annual a-cappella contest? The Grinch absolutely ANNIHILATES Cindy Lou Who with his gut-bursting rendition of “Milkshake” by Kelis.
–“50 Shades of Dracula”
Don Johnson’s daughter wears a bustier and stares longingly at Dracula for two hours.
–“Scott Pilgrim Vs. Little Fockers”
Michael Cera returns as everyone’s favorite Toronto slacker bassist, Scott Pilgrim, who, you may remember, had to defeat girlfriend Mary Elizabeth Winstead’s seven evil ex’s in his last movie. This time, he meets his drummer’s hot aunt, Pam Byrnes-Focker, still smarting after her divorce from Greg Focker. The reason behind their split? The teenaged Focker twins, Samantha and Henry, were exposed to a vat of highly radioactive toxic waste during a school field trip and mutated into 15-foot tall cannibal beasts. In order for Scott to get with Pam, he must defeat her lethal Little Fockers.
–“Back To The Future IV: The Purge: Chaos”
Marty, Jennifer, Doc, Clara, Jules, Verne and Einstein travel back to the future, this time to 2025, in a desperate attempt to salvage a decimated America after the fallout from the upcoming “The Purge: Election Year.”
–“Dumb and Dumbererer and The Huntsman and The Mummy and Frankenstein”
On a dark and stormy night, Harry, Lloyd and one of the Hemsworth brothers run into Victor Frankenstein at a bar. When a beautiful ginger leaves a briefcase full of ransom money next to a barstool, a smitten Harry notices and… steals it, remembering all the trouble he ran into the last time he tried to return a beautiful redhead’s briefcase full of ransom money. After several rounds of Malort shots, he invites them back to his foreboding castle, where he channels several bolts of lightning to resuscitate the mummified corpse of Imhotep, Egyptian high priest. Then Imhotep, Frankenstein, Harry, Lloyd and that Hemsworth go back to the bar for more Malort shots.