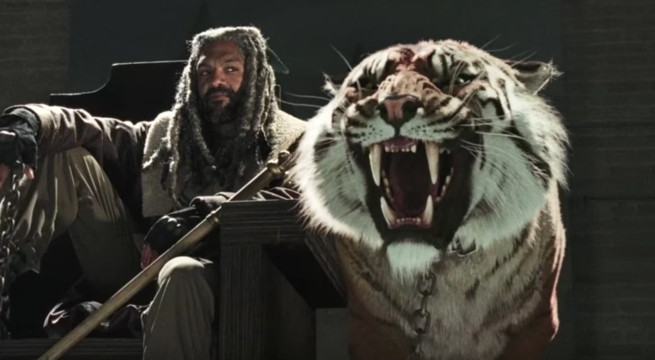 Well it seems that we are all getting much needed emotional therapy from last week’s episode. Though “The Well” is sort of an expositional clusterfuck, we do learn a lot about the inhabitants of The Kingdom and how far-reaching The Savior Stock Exchange is. Happy Halloween.

Our opening shot is of Carol being wheel barreled to safety by Morgan and former Wrigelyville bros on horseback (Richard and… umm… Josh? Mike? Chad?). It isn’t long before they run into trouble, however, and a scuffle with a crowd of walkers sends a disoriented Carol packing. It may be the loss of blood or Morgan’s incessant “they are people too” chant, but she starts hallucinating that walkers are still human. Could Carol the Killer be softening? Even if she is having a temporary change of heart, the recent news about Glenn and Abraham will certainly revive her lust for blood.

Walkers, Cobblers, and Tigers, Oh My!

Once Carol wakes up from her coma, Morgan takes us on a tour of The Kingdom. From what we can tell, this camp is flourishing under the rule of King Ezekial and his striped pet Shiva… but if Carol and Morgan know one thing, it’s how to run a place into the ground (i.e the farm, the prison, Alexandria). It’s a vicious and predictable cycle of “here’s a great spot, now let’s watch it get destroyed.” I’m really looking forward to all of the tertiary character deaths.

So King E and the gang are out tending to their pigs when we learn that they have been feeding them walkers. Although gluten-free, eating the meat of pigs that have been feeding off the undead can’t be good for you. We find out though that the sour sows aren’t meant for the people of The Kingdom, but for Negan’s followers.

Once a week Ezekial secretly meets with The Saviors and gives them requested food and supplies. Though they give them a huge cut of their goods, The Saviors remind Ezekial that they are “letting them off easy”. The pain of parting with the pork seems to be too much for Richard to bear. He succumbs to the taunts of one of The Saviors and is forced to take a few free shots to the face to make up for his insubordination. My bet is that Richard is going to be the first to revolt against Negan’s rule and as promised by a Savior, the first to die.

Morgan has to teach a kid how to use a stick.

Carol, understandably, wants out of the loony bin that is The Kingdom. Ezekial, having figured out that Carol isn’t the bubbly lady she is pretending to be, agrees to let her live in a house outside the walls. That way, he can protect her and she doesn’t have to prescribe to his way of life.

Morgan escorts Carol to her new home, and not nearly an hour later Ezekial is at her door – holding a pomegranate. Although I find Ezekial to be annoying, I also think that Carol deserves some action. Also, pomegranates often symbolize marriage and fertility, so we can expect these two to get pretty cozy with each other in the episodes to come. I’m pretty sure that with the rising tension between The Saviors and everyone else that playtime’s almost over. It’ll be time to get busy soon enough.