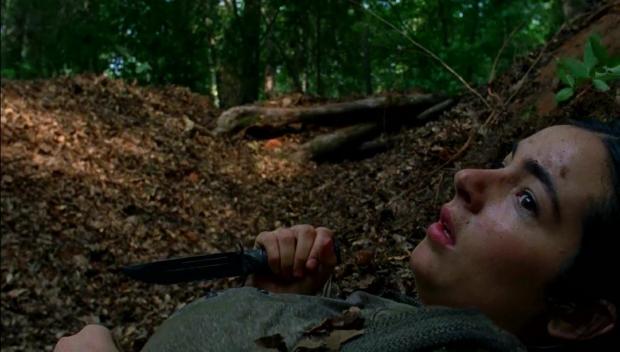 Usually, I’m one to really loathe when “The Walking Dead” does character focused episodes (especially with two non-fan favorites like Tara and Heath). I get it, the story needs growth, development, arcs, etc. etc., but sometimes you just want 45 minutes of walkers being bulldozed down by farm tractors while getting tight shots of Rick’s crazy eyes. However, I found this one to be oddly bearable (maybe because Heath bows out in the first 7 minutes). Let’s get into why this week’s episode smoothly delivers a lot of exposition and packs a ton of girl power to boot.

So Heath and Tara have been on their side quest ever since the group slaughtered all of the men in The Savior’s outpost. After nearly two weeks without a lead, they are running low on fuel and patience. Heath, being the wet blanket he is, wants to turn back. Tara, the plunky optimist, wants to keep looking.

We forget that Heath was living the good life before Rick & Co. showed up. He curtly reminds Tara that Alexandria didn’t have any problems until Tara’s group arrived, completely ignoring the fact that Rick saved all of them from a Lollapalooza-sized walker horde a few weeks ago. I mean, at this point the O.G. Alexandrians blame Rick for when they get pimples. At some point they need to just accept the fact that bad shit was eventually going to come their way and they should be grateful someone was there to save their asses.

Fast forward to the bridge. Heath and Tara happen upon a huge overturned dump truck of what I naturally assumed was kitty litter. Eager to return with supplies, Tara begins pulling a bag out of the mound and triggers an avalanche of dirt and newly freed walkers. The two of them become quickly overwhelmed. Tara falls to the ground covered in ashy walkers and Heath abandons her. I mean let’s be honest. Heath is not that emotionally invested in Tara and has only left the perimeter of Alexandria a few times in the past couple of months. He’s not battle-hardened, and clearly not a hero. In a last-ditch effort to save herself, Tara jumps off the bridge and plunges into the water below.

Tara washes up on shore and is discovered by Cyndie (Sydney Park), and the knife-toting Rachel, played by Mimi Kirkland (she’s a regular on a Disney TV show, so it’s little wonder she’s a convincing child maniac). It’s another reminder that the cold way of the new world has really rubbed off on the kids, but the real question is if this is for better or worse. As we learned from Sophia, being weak can be deadly…but as we learned from Lizzie (the girl who killed her younger sister Mika), bloodlust can be just as lethal for the luster. Only time will tell if Rachel really has what it takes to pull the trigger when it’s a live person on the other end of the barrel.

After Cyndie walks away, Tara stops playing  unconscious and follows her back to camp. Now, over the course of this show we’ve been introduced to a lot of communities, but this one immediately stuck out to me – because there is not a man in sight. But what Oceanside lacks in males, they certainly make up for in ammunition. Right before Tara is caught sneaking around, she catches a glimpse of their arts and crafts table and their formidable stockpile of guns.

Where the Bros At?

The leader of the pack explains that there was an incident where they lost a large number of people in their community (Cyndie’s mom was one of the fallen) and that they were interested in forming an alliance with Alexandria. She agreed to send two people with Tara to scope it out and act as Zombie Nation Ambassadors for Oceanside. Tara is relieved, but this deal sounds too good to be true.

It was pretty obvious that they weren’t going to let her make it back to Alexandria alive. Our suspicions are confirmed when Tara and her armed escorts, Beatrice and (insert random name of ponytailed woman here) happen upon a walker tangled in a tree. Seeing her opportunity to escape, Tara offers to take care of the biter, but instead pulls an Allen Iverson level fake-out and makes a run for it.

Tara almost escapes, but Beatrice gets the best of her. As she aims her assault rifle at Tara she confesses why they kill everyone who happens upon her site and the real reason there are no men at Oceanside – The Saviors. I was really hoping for a hardcore “we only keep the men alive for sex” sceanario, but the reality was much more gorey. Oceanside used to be a flourishing community and then The Saviors tried to force them into their racketeering scheme, but they tried to fight back. The Saviors are obviously not fans of resistance and killed every man over the age of 10 in their camp.

Obviously, the people of Oceanside don’t want to risk being discovered again by Negan, so when Tara explained how they had attacked The Outpost, they knew they had no choice but to take her out. Stuck between a rock and a razor-wire-covered bat, it’s clear Beatrice is not happy about her task at hand, but readies herself to kill Tara anyway.  Cyndie, the ultimate preteen ex machina, quickly leaps out of the bushes and knocks Beatrice to the ground. Tara, in Health-like fashion, quickly heads for the hills.

After narrowly escaping the Warrior Women of Oceanside, Tara finds car tracks that she believes Heath left behind. Honestly, I could care less about him at this point. With an inevitable impending showdown with The Saviors, the less dead weight and terrible dread wigs we have on this show, the better.  Tara, however, sees things differently, and cheerfully picks up a card labeled “PPP” and embarks on her quest to find Heath and return to Alexandria.

Although she doesn’t find any supplies, Tara is super stoked to show off her sweet new shades and pointy stick to the rest of the group. Her bubble is quickly burst when Eugene gives her the play-by-play on what has been going on. Tara lost three of the people who she was closest too. Normally I think she would have chosen the path of vengeance, but after learning what happened to the community at Oceanside, she obviously feels that retaliation is pretty hopeless.