It may surprise you to learn, dear reader, that HBO’s blockbuster smash series “Westworld,” about to embark on its second season, was actually a remake of a 1973 Michael Crichton/Yul Brynner sci-fi classic. Armani Barron and Alex Kirschenbaum unpack the OG “Westworld” below, and determine the all-important question: Is the original better than the remake?

Check out our podcast appraisals of “Westworld”here and here.

Alex: WHERE TO BEGIN??

Watching the original 1973 Michael Crichton “Westworld” just reinforced how damn slow the HBO TV series is, and brought up a big sticking point for this viewer: serialized television sometimes can’t get out of its own way when it comes to drawing out and overcomplicating plotting to justify its own length. “True Detective” (yes, season one of “True Detective”) was guilty of this. “Westworld,” too. Superfluous padding of inherently simply ideas, ideas that really should be movies and TV shows if justice still existed in this world (but, news flash, it does not). My rating, out of **** stars (including half-stars), is ***.

As soon as we download the setup of “Westworld,” explained with clear, straightforward narration from within the flick’s own mise-en-scene (a pre-recorded narrator explains basically everything as James Brolin and Richard Benjamin take various modes of transport to the resort, and Brolin plugs in the gaps), we can surmise where this is going: the ride is going to malfunction. The robots will kill the tourists. It’s essentially Crichton’s model for his later bestselling book, “Jurassic Park,” except the baddies are realistic robots, not resurrected dinosaurs. Otherwise, the beats are fairly similar — and there’s never much doubt as to where this is headed. Basically, the first 20 minutes or so of the film comprised the TV series’ first two episodes, which ran a total of… 68 minutes. The storytelling slowed to a crawl when it had to be stretched across ten episodes.

As a movie, “Westworld” is frothy and fun, a western-science fiction mash-up that moves with style but is ultimately more notable for having an intriguing concept than for any lasting resonance. Brolin (who, here in his youth, kind of looks like a combination of his son Josh and Christian Bale) and Benjamin are capable leads, but the star of the show is the man on all the posters, Yul Brynner, as a “Gunman” model in the park (“406 or 606,” according to a terrified Westworld lab technician) who is programmed to lose every shoot-out to his guests, but through a system bug in his neural network becomes a practically un-killable, incredibly accurate homicidal marksman. The Brynner character apparently served as one of the big inspirations for James Cameron’s “Terminator,” and its influence is pretty obvious here, especially in the last reel, when the robot gets acid splashed on its face and set on fire, but still keeps on chugging, relentless in its pursuit of the kill. The production design and makeup effects were also a highlight — it’s clear that certain moments were aped by successive generations in later blockbusters. I’m thinking specifically of the way Yul Brynner’s face separates from his mecha-skull, which Rick Baker clearly paid loving homage to in “Men In Black.” 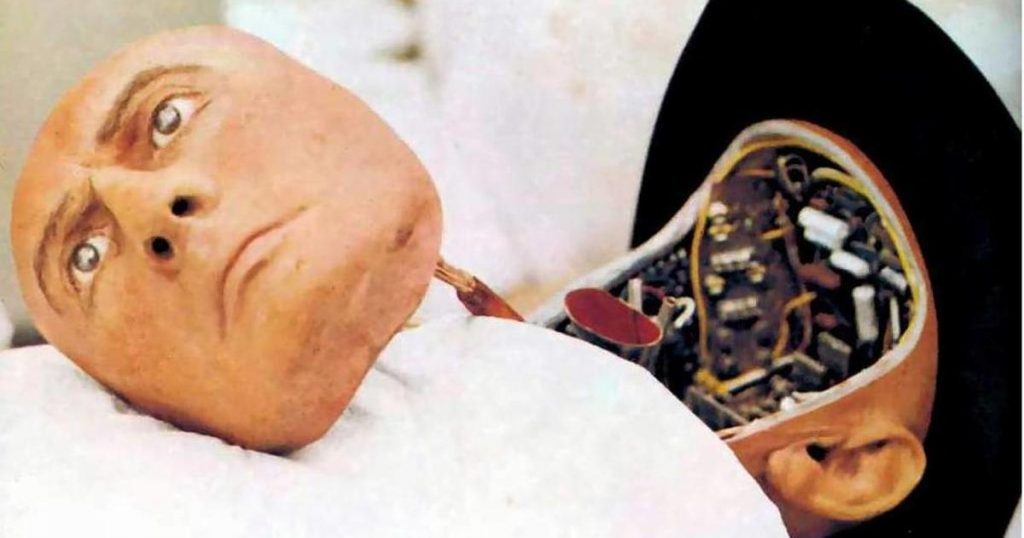 And here is more or less the same effect in “Men In Black:”

Armani: That was a great setup, I’m just going to jump right in.

I couldn’t agree with you more about pacing, what it took the HBO series to address over episodes only took the movie ten minutes to cover. What I did enjoy about the show’s “padding” however is we got to really understand how the robots are programmed and developed and also how the narratives evolve with each other. Yes, briefly that concept is explored when a guest seduces The Queen in Medieval World, but they hardly delve into the intricacies of story writing from a staff member’s perspective.

I’ll also argue that the amazing performances we get from people like Anthony Hopkins and Jeffrey Wright certainly make up for the slow pacing of the show. Aside from Yul I’m not sure any other performances really stuck with me the same way, and as an ensemble, I feel that the cast in the remake is alot stronger.

Now on to VFX. We’ve come a looooong way since the ’70’s so I can’t really hold certain things against them. I really enjoyed the robot’s heat-seeking vision, though I don’t understand why they would want them to operate that way instead of normal cameras (but it helps our hero in the end so I digress). If anything the cheesiest scene was when they show the robot operating table and they literally have just scotch taped aux cords to people’s foreheads and call it “sciencing”. But overall I think the campy approach to the effects and music lighted what otherwise would have been a super dark movie with robots slaughtering humans.

I also love when Richard Benjamin saves the robot woman in the castle and tries to give her water. She says no and then short circuits when he tries to give her water anyway. At this point in the movie, the audience was kind of rooting for her rescue so it was awesome when we got the rug pulled up from under us again.

Alex: That’s true, the big advantage of making this into a TV show is lending time to nuances like robot programming. It’s superfluous to the plot, but is interesting as a kind of bonus futuristic window dressing.

Hopkins and Wright are great actors, and they elevated the material they were given as best they could (I also thought Thandie Newton made for a surprisingly poignant and empathetic robot on the show). We can both agree that Brynner was the standout here, everyone else was more or less operating in service of the plot, dancing around Brynner. Benjamin and Brolin were capable, but not at the level of Hopkins, Wright or Newton. The slow-as-molasses plot just eventually turned me off when the story was translated to the small screen, that was really its biggest sin for me.

I guess principally the robots’ heat-seeking vision was an engineering design choice, manufactured so that they would only harm other robots, and never the three theme park worlds’ human guests. That was an aside, mentioned by James Brolin casually for about two seconds. Might have served Crichton and Co. to emphasize that point once or twice more throughout the proceedings.

Do you think the ultimately goal of the captured robot that Richard Benjamin freed at the end would have been, once freed, to kill Richard Benjamin, as she too was probably suffering from the same homicidal bug affecting the other park robots’ circuits? Or do you think she just wanted to be left to her own devices, wandering around the now-empty park for all eternity?

Apparently there was a sequel to this, the “Star Trek”-channeling “Futureworld” in 1976. Brynner returned, joining new stars Peter Fonda and Gwyneth Paltrow’s mom. Michael Crichton and Richard Benjamin opted out, though.

Armani: Hm, I’m not sure about the captive robot lady’s intentions. If we go back (or, rather, forward) to the TV show “Westworld” it was kind of implied that everything was sort of on “Jumanji” rules, i.e, if you complete the mission even after the stakes are raised, then the other robots would stand down. It didn’t seem like any of the robots were capable of being manipulative, the way robots like Newton were on the show. Or, this may just be a glaring plot hole that we have discovered. Either way, I think she legit wanted to be rescued.

Ultimately I’m not sure that the movie was really looking to answer the same philosophical questions as the TV show is. In my opinion, the central question to me posed by Crichton and co. was, “What if Terminators were forced to perform in a play everyday?”

To be fair, though, the “Westworld” movie was undoubtedly ahead of its time. With more recent AI movies, like, say, “AI” (lol), “I, Robot,” and even the Disney Channel Original “Pixel Perfect” we have been sort of inundated with the same robot vs. reality dilemma and are therefore a little bored with it… However, these themes were already being presented by “Westworld” 44 years ago. Often when we watch older sci-fi movies, we think about what they could have done with modern special effects, more advanced equipment, and bigger budgets. Even though HBO and show runners Jonathan Nolan and JJ Abrams chose to go into a serial format rather than attempting another feature film, I do feel like the new production of “Westworld” has really tried to push itself. They have been asking the big questions and really tried to approach the answer to them in a unique way. “Westworld” definitely set a solid foundation for itself to continue to build off of, and I’m looking forward to season two.