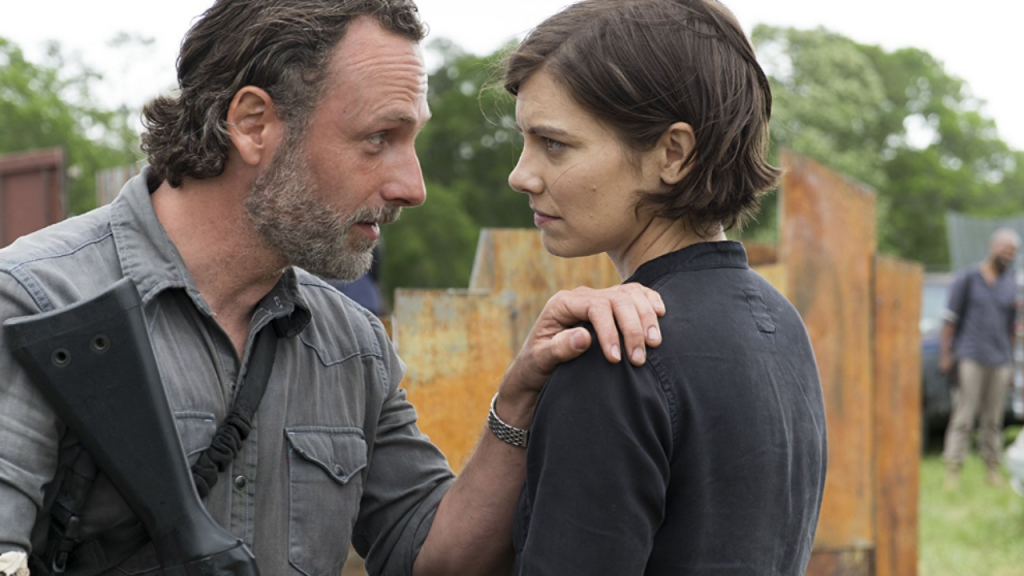 “My mercy prevails over my wrath.” These were the words mentally whispered by Rick Grimes as he delivered his a rallying speech to the Survivors. As we march through “The Walking Dead” season eight premiere, “Mercy,” it’s reasonable to wonder if Rick has any left. When we last left our rag-tag group they had simultaneously declared war on Negan and on pessimism. They were going to reclaim the new world and then shape it into the post-apocalyptic Walker utopia that many hadn’t dare dream of. The real question may not be the how, but rather at what cost. Must the remaining Survivors completely abandon their humanity in order to save it? Is Rick’s hope of a future merely a pipe dream? If Shane is really Judith’s dad then why isn’t she a brunette? Here’s to hoping that these questions and many more will be answered in this season of “TWD.”

We open this season flashing between everyone manning their battle stations and Rick, doing what Andrew Lincoln does best as the character, looking pensive.  With the help of Dwight, the group is planning their first attack on the Saviors. While Maggie promises that they can make their world bigger together, Rick emphasizes that there is only one person who needs to die… Negan. This show has been dropping unsubtle hints that the final face-off will really be between Rick and Negan, but we can be pretty certain it’s not going to happen until the very last second of season eight. The impending war between the two groups is certainly going to encompass the entire season. It’s too early to tell if that’s going to be a good or bad thing. On one hand, if AMC consistently delivers action-packed episodes like this one, the journey to the final battle won’t feel as tedious. However, due to budget constraints, and their insistence on unfulfilling character development in regards to secondary characters like Tara, we can bet on a few middling stopgap episodes along the way.

It’s not just next week we are looking forward to, for Rick & Co. it’s hopefully the many years ahead. As he shifts from reality into a daydream he imagines an older version of himself. One who has grown grey, watched Judith grow up, and become a part of a thriving community.  With the theatrics of King Ezekiel and the support of Maggie, Rick emphasizes the importance of their fight. As the crowd prepares to disperse, Rick tells Maggie that he can’t wait to follow her. Although some may be worried about someone with a bun in the oven marching into enemy fire, Maggie slyly inserts that “war can be waged in the second trimester” line. It’s refreshing to see that a single mother can democratically be appointed to office as America finally gets progressive post-apocalypse. 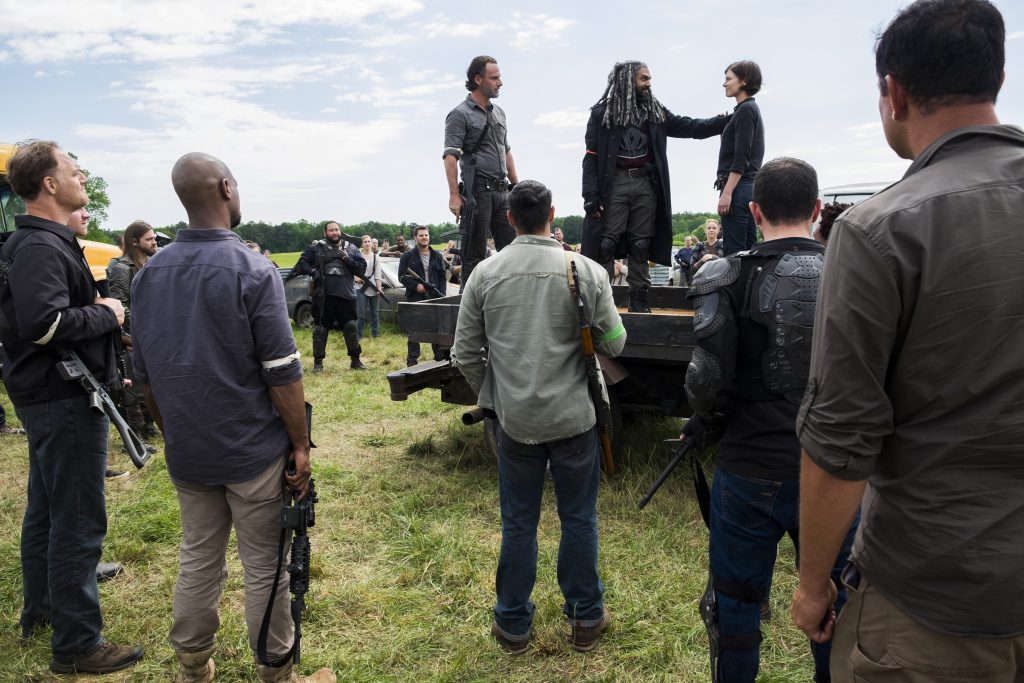 Rick, King Ezekial, and Maggie host a pep rally for the Survivors before their attack on the Savior’s compound.

Despite his big talk about a bright future, Rick doesn’t have too much faith in humanity. As Carl is scavenging for fuel, he is startled by the voice of a stranger pleading with another unknown entity. He draws his gun and ducks down to see a pair of legs hiding behind a nearby vehicle. Carl sprints around to cut the person off before he sprints past him and away from… dun dun dun… Rick chasing after him. The stranger insists that he was only looking for food when Rick fires a final warning shot over his head. The stranger runs off. Old Rick would have given the kid the three questions, but in the midst of war, Rick seems to have less room in his heart for compassion. Carl calls him out on this, and as he walks away he warns Rick that it may be too late for hope.

Everything starts to come together as Morgan and a few other members of the team take out the lookouts on the road to the Saviors’ compound. Just like the Governor used the undead as a tool to overrun the prison, it looks like the group is going to do the same to Negan and the Saviors. They use a chain of explosions to lure the Walkers down the road and when the Saviors see the explosions, they head out to survey the damage, thus leaving the compound slightly less manned.

As the Saviors slip out, Rick slips in. Without the ability to ring a doorbell, the gang opens fire to announce to Negan that they’re hot, and some of them are single and ready to mingle. Amused, Negan reminds them that they don’t have the numbers to engage in a full-on war with the Saviors. His intel? Who else but slimy Gregory. In an attempt to save his own skin, he tells the members’ other Hilltop citizens that they need to surrender — or else they and their families will be expelled from the community and left to fend for themselves. Unfazed, Jesus announces that they only follow Maggie. It’s uncertain how much respect Gregory even had at the Hilltop, to begin with, and it’s obvious that he doesn’t have any with the Saviors. Once the Survivors reject his plea bargain, Simon pushes Gregory down the stairs and hopefully to his much-deserved death.

They open an obnoxious amount of fire. Without Eugene to make bullets for them, it’s not hard to speculate if this was the best use of resources to draw Walkers. Instead of blowing up a car, they should have had Daryl just bang on pots and use a bomb to break down the doors of the compound. But nonetheless, this literal gun show is enough to rattle Negan & Bros while generating enough noise to draw the dead. 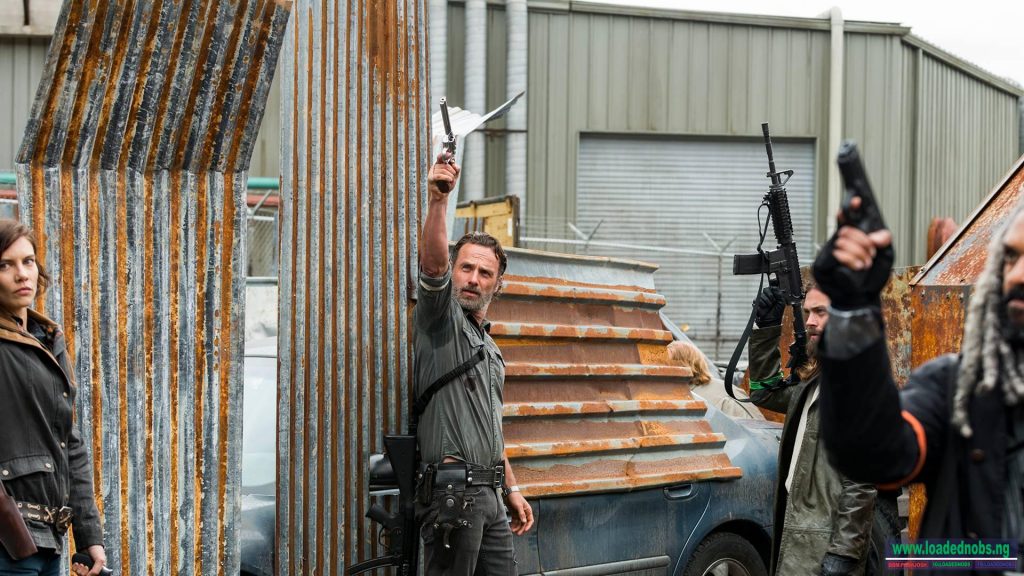 It seems the plan has worked and the Survivors begin to retreat as the Walkers swarm the compound. Rick spots Negan hiding behind some set dressing and continues to fire angrily in his direction. Never mind the flesh-eating undead stumbling ever closer. Gabriel urges Rick to cease fire, but driven by anger Rick persists. It isn’t until Gabriel reminds Rick that the battle isn’t about him to fall back. This may foreshadow another encounter in the future where Rick’s pride gets in the way of their overall mission success or costs him dearly. In this world, the high costs of pride are more than a dick measuring contest, it’s an arm… or a leg, or… did I say arm? (HINT.)

As the rest of the crew drives away, Father Gabriel spots Gregory frantically calling for help. It seems he has survived the Simon distrust fall, but without any means of escaping the oncoming herd. When we first met Father Gabriel, he was the king of leaving people behind. He literally locked out his entire congregation during the initial outbreak and didn’t bat an eye. Now, in the middle of battle, in front of a man who was revealed to have betrayed EVERYONE five minutes ago, he’s torn. Ignoring the plan, common sense, and our useless pleading from behind the fourth wall, Gabriel exits his vehicle in an attempt to rescue Gregory. As expected, Gregory screws Faja G over. He runs toward the car and drives away, leaving our Priest without a paddle ride home.

Panicked, Gabriel manages to claw his way into a trailer outside of the doors of the compound. Too bad Negan is in there taking refuge as well. This is now the second time Gabriel has been captured and the second time we don’t care. When Negan asks him if he has his “sh*tting pants” on,  I’m hoping that he’s had some steaks for dinner, because right now there are none (stakes, that is). Gabriel has never been a heavy hitter or a fan favorite. His rescue mission may only be driven by principal and the fact that Rick may feel guilty for dilly-dallying while they were supposed to be making their escape. The real concern is if Gabriel gives up any information on the Survivors and what Negan chooses to do with it.