We’re back with another Filmcore Critical Exchangecore. This time it’s for Netflix’s original series “Altered Carbon.” I went into this series pretty unaware of its backstory, but it’s based on the novel of the same name written by Richard K. Morgan. The TLDR version of the story is that now humans have the ability to upload their consciousness onto “stacks” and then use those stacks to control human bodies, called “sleeves” here. Giving humans the power to live hundreds of years? What could go wrong? OBV plenty as our main anti-hero and ex-rebel fighter Takeshi Kovacs (Joel Kinnaman [in some egregious literal whitewashing – Ed.]) learns. After he is woken up from a government-sanctioned slumber, he’s uploaded into an ex-cop’s body to figure out an unsolved mystery. Armani Barron and Delwyn Harris have some thoughts.

AB: Honestly, I thought this show tried to be everything for everyone and missed the opportunity to be the philosophical detective noir we wanted it to be. Instead we got some bastardized version of “Blade Runner.” Del, what were your initial thoughts on the series?

DH: I should go into this discussion stating that I also had never been exposed to the Richard K. Morgan source material novels directly, but knew the general concept of the story. My initial thoughts on the series upon viewing the first two episodes were basically, “WOW this is high budget.” The world-building and production design are top notch and those comparisons to “Blade Runner” are all rightly earned, in my opinion. I was particularly struck by the way the richest people live, literally up in the clouds in organic 3D printed-looking structures. It makes me wonder what the hell is filling up the other 300 stories of those buildings, but that’s another discussion.

You might get some pushback from me on calling it a bastardized version of “Blade Runner,” however, because I think “Altered Carbon” ran with its own ideas enough to escape that declaration. Whereas the original “Blade Runner” focused entirely on what it means to be human, “Altered Carbon” was focused a lot more on the issue of “identity” in general. I got a huge kick out of the creepy AI hotels in the show, and the way “Altered Carbon” basically skimmed right over the humans vs. AI conflict of “Blade Runner.” This is a world where humans and robots aren’t really too different at all – since humans without sleeves are basically just digital consciousnesses as well. I thought it was cool how a lot of the AI are implied to have basically retreated into the net to live out their own existence in “unions” and virtual poker nights. The AI hotel Poe (Chris Conner) is seen as an outsider for his interest in human beings and the way they live, and the question of identity extends to him as well. He selects his Edgar Allen Poe avatar and chooses to interact with human beings and learn from them. Robots and technology aren’t treated like slaves to humanity in “Altered Carbon,” but almost like afterthoughts that we sort of forgot about when stack technology was discovered.

“Blade Runner” always made the world seem positively awful to be stuck in and I liked how the world of “Altered Carbon” isn’t quite so grim. Sure, the richest can basically live forever and do as they please, but the very nature of stack technology and interstellar travel ensures certain forms of dystopia can’t really take root. The nature of identity and what it would TRULY mean for society to shed such limitations isn’t actually given enough breathing room to be explored as fully as I would have liked, in fact. What I mean by that is that this is a show set 300+ years in the future with this incredible technology and interstellar travel as a casual fact. We are a multi-planet species that can transcend physical death. So in that sense, I was disappointed that the world was as grounded as it was. Comparisons to “Blade Runner” are unfortunate because, in my nerdy head, I’m imagining way more far-out consequences on the implications of society. I’d encourage you to check out The Culture series of sci-fi novels, because that’s how I’d like to see these fantastical ideas extrapolated in “Altered Carbon.” 300 years in the future with such incredible technology shouldn’t look like something that’s possibly less than 50 years from now. Why is everyone still using guns that shoot bullets? Why are people still using phrases like “douchebag” or “fuck?” It’s not a deal-breaker for me by any means, but there’s a lost opportunity there that someone with a bit more vision like Denis Villeneuve probably wouldn’t have squandered.

All that being said, I was utterly hooked by the show for everything it does so well and so compellingly. The cast is extremely multicultural and I thought that was great to see. 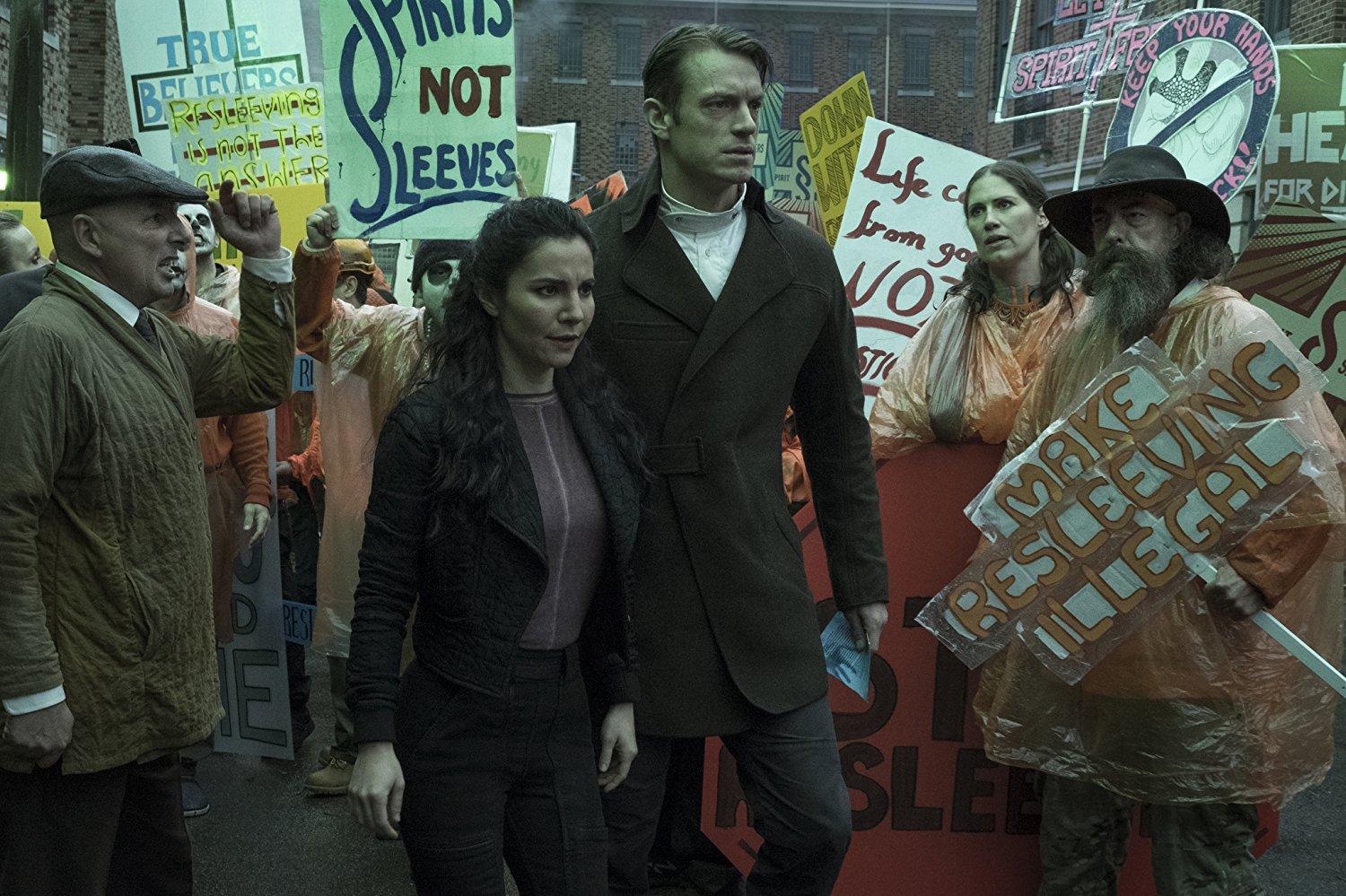 AB: So those are some solid points. It’s obvious that Netflix isn’t afraid to invest a lot of coin in original programming and “AC” was definitely allocated a huge chunk of it. Even with all the glitz and glam of a healthy budget, the writing and plot rarely go further than skin deep.

I find it interesting that the theme of “identity” rings the strongest for you. But I also agree that the real crux of this series should have been how immortality affects our class systems, socioeconomic divides, and societies’ outlook as a whole. As rebel leader and Kovacs’s love interest, Quellcrist Falconer (Renee Elise Goldsberry), states, “death was the great equalizer.” As soon as she said that my ears perked up, we finally understood that the rebels felt like immortality was only further corrupting society rather than advancing it. But alas as soon as we got hit with that we were thrown back into an endless barrage of fighting and talk about “frying stacks”.

Kovacs and Rei’s plight after they were orphaned is that there was actually not a lot of hope for those looking to move up in their tax bracket. So even in a world where they have discovered life-extending tech where they could have really better humanity as a whole, we see expectedly being abused by those with wealth and power. Even when there actually was a system in place for those who were prematurely robbed of their lives, like the little girl in episode one, they shove her into an 80 year-old sleeve and write it off as “you get what you get when it’s free.” If that isn’t the definition of grim I don’t know what is. So instead of really exploring the psychological effects of being too poor to really afford the immortality waved in front of them, we spend a lot more time seeing how the wealthy abuse it.

I’m saying all of this while keeping in mind that there will be a season two, but it looks like we are going off world anyway and won’t get to dive deeper into the state of earth. Which to be honest I have no idea what that even means still. It’s unfortunate that after 10 episodes I still feel like we barely got to see a lot of earth’s culture and development and are now being thrust into another part of the universe we know nothing about. I felt like instead of actual world building we got a lot of smoke and mirrors to distract us from the fact that everything is rarely actually explained. We didn’t even really get the full break down on how sleeve technology came to be until I believe episode three and by the time we get the twist at the end I find it hard to care because we don’t even fully understand the tech so can’t possibly be blown away by this revelation (I’m talking about Kovacs being double-sleeved but don’t want to spoil that).

Also, the whole using guns thing is a great point! Like in a world where there is a different set of laws for “biological damage” vs “stack damage” you would think that weaponry would be a bit more sophisticated. Honestly the more traditional weapons like swords, knives, and that medieval claw thing I felt more impressive than the normal guns they were shooting.

But back into the dialogue, I couldn’t agree more. This is a society where people live hundreds of years and no one has expanded their vocabulary past phrases like “Grow some balls.” Like at least have futuristic slang?

TLDR. I’m not here to completely bash this show by any means. I was just excited for Netflix to tackle a sci-fi project of this magnitude, and after seeing them hit “Dark” out of the park, I had really high expectations. I would have liked fewer characters, more world-building, and scripts that don’t feel like they were transcribed by a 13 year-old.  All in all, I’ll give it a ** 1/2  out of **** stars. Your rating? Final thoughts?

DH: So I’m not sure where the show could or will go for season two but I’ll say that I’d just like to see everything extrapolated and expanded to the degree I think it deserves. These are big ideas and themes the show plays with, and I don’t feel like it’s a stretch to try and cheer them on into being brave and exploring them deeper.

My final rating for the show, out of **** stars, would have to be *** stars. There is so much to like and appreciate about what this show offers and I think they’re capable of delivering something even more special for round two. Most of my commentary is just nitpicking and projection. There was very little that I found outright bad or poorly handled.

To anyone who checked this out and really enjoyed it but maybe agrees with the things I’ve said as well, I’d highly, highly encourage you to check out the show “The Expanse” on SyFy which is about to return for its third season. It’s probably the most interesting and realistically presented show about near-future humanity spreading into the solar system I’ve seen. They don’t shy away from the little details, and to the contrary, they actually make them serve the plot and motivations of the characters immersed therein. They even invented a weird asteroid belt language that the “belters” (those who were born, raised and live out in the asteroid belts and space stations) speak that’s this bizarre mix of Creole, French, and urban slang. Details matter, “Altered Carbon!”

SPOILER-FILLED BONUS ROUND FROM THE MIND OF DEL: