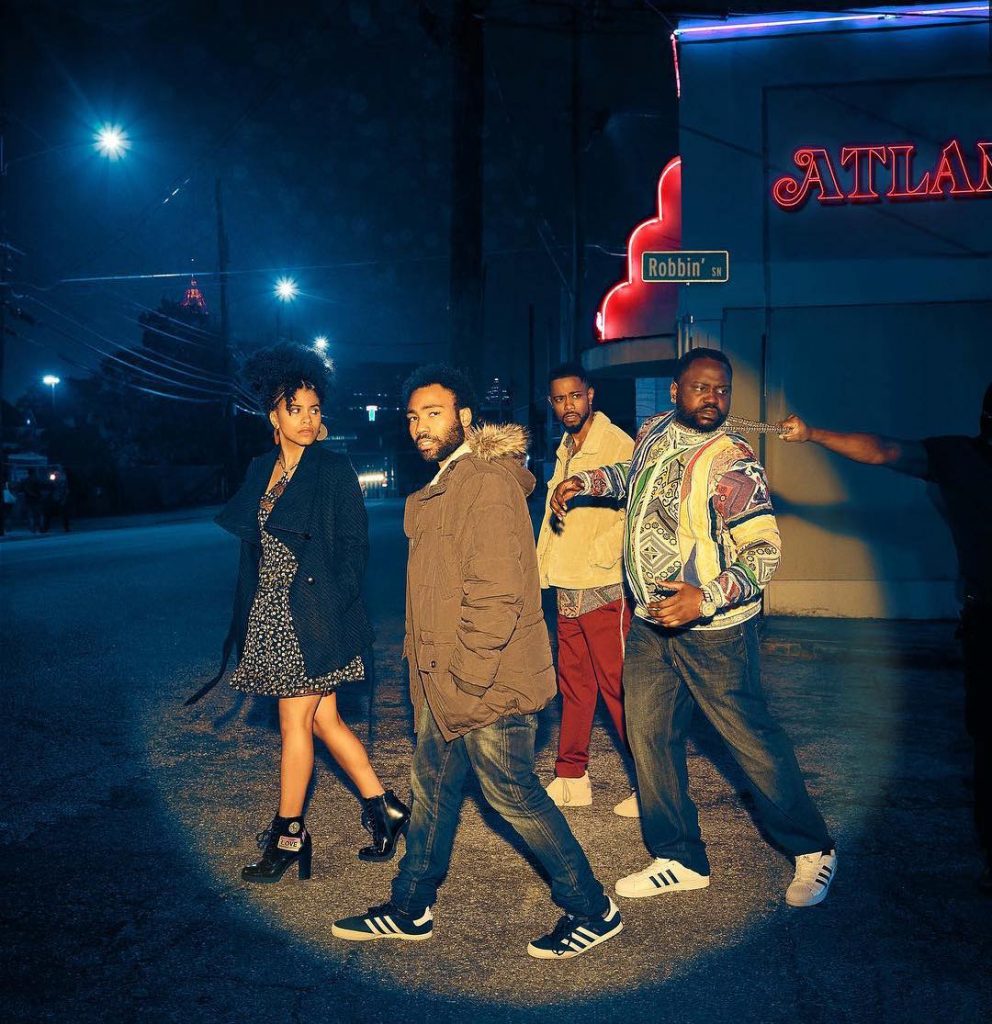 Black America has had a tough year. Well, really a tough existence, but with a KKK sympathizer in the White House, the loss of Kanye West to the sunken place, and Blue Lives Matter being an actual thing, it felt like 2018 might just be another year of Kardashian drama and new flavors of Doritos. But then Donald Glover came to our rescue. Some may know him by his musical moniker Childish Gambino, but to many, he is the mastermind behind FX’s unapologetically black hit show “Atlanta.” Filmcore’s Armani Barron and TJ Morrison are joined again by writer, comedian, and all-around good human being Adam Lawson to discuss their favorite moments from “Atlanta,” Season Two.

Armani: So I think it’s safe to say that Atlanta has really cemented itself as a timeless classic this season, right up there with “The Wire” and “Breaking Bad.” Off the top of my head, I can’t think of another show that manages to really tackle very complicated issues, like childhood bullying or the desperation of poverty in communities of color quite like this. I actually got to go to the Season Two premiere in Atlanta (my second home), and the first five minutes of the premiere blew my mind. Donald Glover does a great job of taking us to familiar places, places that I feel mean something different to a black person in America, like a mall sneaker shop or a strip club, and have the characters make such insightful commentaries within them. What were some of the moments that sold you this season? That made you laugh? That broke your heart?

Adam: Season Two was so ambitious in terms of its messaging and the breadth of its content. Season One felt like an insider look into the more mundane, yet still intriguing aspects of black culture. And I loved it, it was the “Boy Meets World”/”Curb Your Enthusiasm” amalgamation I always wanted. So I was initially dismayed by Season Two’s significant tonal departure. It was weird and paced differently, and every episode had a tinge of unsettling ambiguity. Like being watched from a two-way mirror.

And then I watched “Woods.” After that episode, I needed to go for an extended walk around my neighborhood with some introspective music and little whiskey in my coffee to decompress. I’ve always thought Paper Boy is the most relatable character to me, Earn Marks (Glover) is too likable and Darius (Lakeith Stanfield) too trusting in unseen powers. Paper Boi (Brian Tyree Henry), to use a nerdy “D&D” reference, is Chaotic Neutral. He’s an individualist aligned with nothing but his own liberty.

In “Woods,” Paper Boi deals with love, danger, his own mortality, then his own purpose with his art and platform. It’s a fucking ride, especially when you research the episode and find out that the man in the woods may have been some sort of panic-induced representation of his mother, or maybe even something more terrifying — perhaps he wasn’t an apparition at all, and was in fact some sort of violent hermit sage. It was deep and important and accessible and damn it if I don’t want something like that in my life.

TJ: Yo, “Robbin’ Season” is some of the most impressive and creative television I think I’ve ever seen. Shows like this that hit so hard from the jump, there’s always that pressure to somehow put ambition aside and remake the first season in some way.  In the case of “Atlanta,” delivering something akin to the feeling viewers got from the surreal mundanity of season one would’ve still been rad, sure, but it would’ve also been the safest way to approach a second season for a show that specializes in avoiding the safe way out. I think what makes this so impressive to me is that Glover and co. ratcheted up the stakes in the very first episode, and then throughout the season they rarely let viewers take comfort in the relaxed strangeness that made it a hit in the first place. Each character got the spotlight at points, which gave us some insight into their somewhat familiar struggles and disappointments. I was completely sold on this season as soon as Paper Boi/Alfred’s supplier finished his overly apologetic robbery with, “Appreciate you, man.” while still lazily holding Alfred at gunpoint from within the car. Shit was gold. Mannnn Alfred had a rough season, ya’ll.

Armani: I think all the characters had a pretty transformative season. But Earn and Alfred definitely got the brunt of it. Arguably Darius, though undeniably our resident sage, grew the least. He also remains the most mysterious. I really enjoyed the episode “Teddy Perkins.” We don’t really get a lot of Darius overall, except with his philosophical interjections, so it was nice to finally get an Darius-eccentric episode. I also loved how it tackled the brutal practice of raising child stars and the psychological effects on them years later. Sure we love their music, but is it worth the human costs it appears to take to produce that music? Especially if that cost is paid for by someone too young to understand what it means to sacrifice your childhood for fame? This was all symbolized by the piano, whose multicolored keys made it easier for a child to labor at them. Near the end of the episode, they were covered in blood, mirroring the loss of innocence suffered by those who played it and maybe even the same innocence that must be sacrificed by the group to help Alfred succeed.

Also, I’m glad we saw more of Val (the inimitable Zazie Beetz) as an independent character rather than just “Earn’s girlfriend.” That said, her world in the context of the show still definitely revolves around their relationship. Issues concerning their child are one thing, but in “Champagne Papi,” for example, this was supposed to be Val’s bottle episode but it was just more about her trying to get over Earn and trying to find Drake. I’m just worried she’s going to become another manic pixie dream girl and never fully become her own person. With her being the only main female character on the show, it’s imperative that she be given her own agency. As of right now, this show fails the Bechdel test.

What are some of your predictions for next season? Do you think Alfred/Paper Boi will ascend to stardom now that he’s most likely going to be headlining the tour? Will Earn’s gun switcharoo come back to haunt the trio? Will Val finally kick Earn to the curb and move back in with her wealthy parents? What happened to that piano?

Adam: Agreed 100% on Val. The Bechdel Test is real as hell and it’s disappointing a show so conscious, adventurous and authentic still fails a fairly simple, but very important, parameter. The premise of the Drake episode was so solid, I love Hollywood dynamics expressed through lenses of satire and irony (RIP “White Famous” — I’ll remember you fondly) but I feel toward the end, the episode petered off into something unfulfilling. I’m not saying an actual Drake cameo is necessary, but I felt it lacked catharsis. Val’s friend diatribe to the interracial couple and its retort were pretty solid though.

My dad does an eerily good Teddy Perkins impersonation and he scared my mom and I with it for about 15 minutes. And to share a nuclear family moment, watching sitcoms while eating takeout dinner, then to have that same wholesome American moment end with a televised bloodbath is something I am grateful to Donald Glover for.

As for next season, I think it’ll be about Earn’s climb out of the hole he dug himself into, I think we’ll see Paper Boi morphing into something different, still authentic but he’s due for a shift. I don’t think he’ll flat-out be an antagonist but I think his relationships will be fractured. It’ll be sort of cool if they remain broken as well, like a relationship in real life.

TJ: Agreed on the Bechdel test points as well. But also to that point, I’m happy that the show creators work to have women either writing or directing episodes centering on Val. Hiro Murai has a unique vision that gives the show its otherworldly feel, it’s an incredible aesthetic. He’s responsible for most of Gambino’s music videos, including the mind-blowing “This Is America” — so while I’m always happy to consume Murai’s work, I’m very glad that they trust women to tell a woman’s story. Hiro is wonderful, but there is something about Val’s episodes that are so clearly captured through a woman’s eye. I don’t think Hiro could’ve pulled them off so authentically.