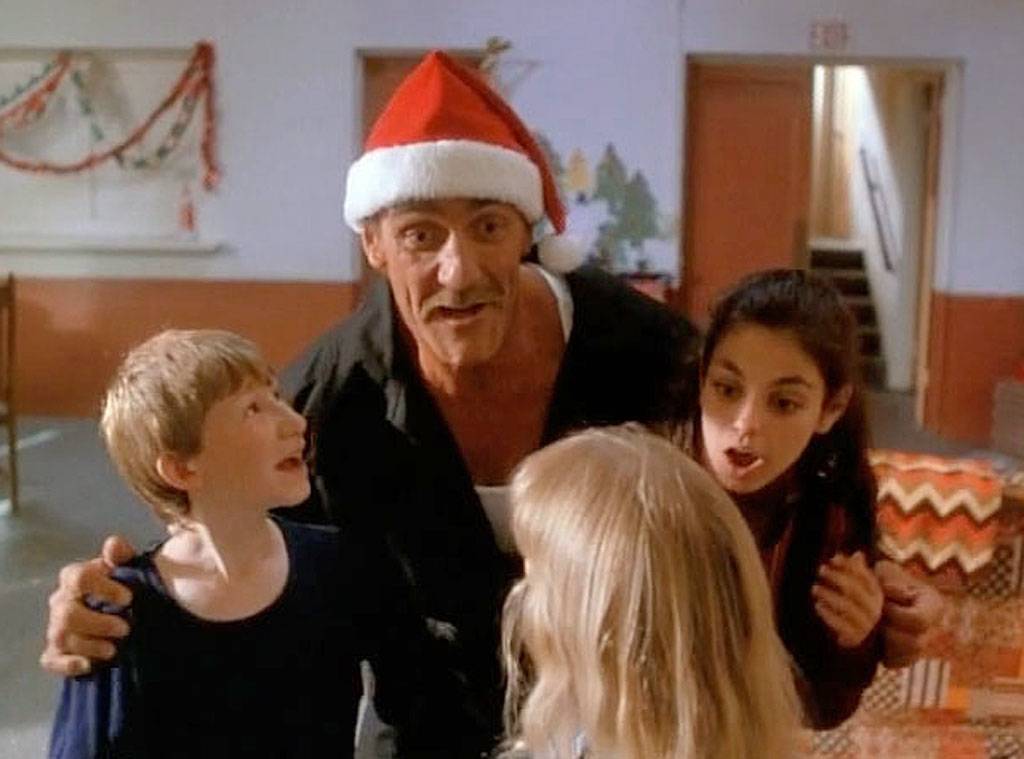 Have you ever wanted to see a Santa movie with low-end production values and a super-mega-jacked St. Nick? Well look no further, because Filmcore scribes Armani Barron and Alex Kirschenbaum dove deep into the dregs of 1996 to view a movie that isn’t nearly as awesome as its moniker may portend, “Santa With Muscles”! The film stars “Hollywood” Hulk Hogan as a spoiled body builder and health supplement hawker who needs to be taught a lesson about the spirit of Christmas, Ed Begley Jr. as an eccentric millionaire (possibly billionaire?) with a nose for subterranean diamond caverns, and no less than TWO recurring cast members of “That 70s Show.”

Alex Kirschenbaum: After a series of misadventures, super-loaded and mega-jacked blowhard Blake Thorne (Hogan) suffers temporary amnesia after a fortuitous concussion, decked out in a mall Santa Claus outfit. Lenny (Don Stark, father to Donna on “That ’70s Show”), a cash-strapped mall elf who is working to pay off a debt to the Ebenezer Scrooge/Mr. Potter hybrid Ebner Frost (Bagley), convinces Blake that he is in fact the real Santa Claus. Blake responds by immediately garnering local news media attention as he beats up two hoodlums trying to rob an orphanage fundraiser, and then goes to work saving the orphanage from Frost’s fiendish plot to destroy it. Mila Kunis plays a sassy orphan kid. Frost knows that the orphanage happens to rest on top of a priceless cavern of diamonds deep beneath the earth, and eventually coerces the adorable tykes and their caretakers to mine for the stuff. Does Hulk regain his memory, learn a valuable lesson and save the day? What do you think?

This came out in theaters. No, seriously. Granted, it only made $220,198 according to Wikipedia and was only playing in theaters for two weeks, but that technically counts. Hulk Hogan isn’t not much of an actor outside of a wrestling ring, but his steroid regimen is really impressive.

ALSO. That final zoom-in, of the Santa Claus hat on the hedge, was awkward and very staccato. Did they not have time to re-shoot it to smooth that out?

Armani Barron: I was surprised by how much star power this film had and how equally ashamed they must all be. Actually, “ashamed” is a strong word. But if you’ve ever felt slightly embarrassed by your own early work, then don’t worry because you’re not alone. Aside from its horrible writing and overly complicated plot, the ADR on this movie was pretty bad, so I’m not surprised that they didn’t bother to reshoot the Santa hat at the end. 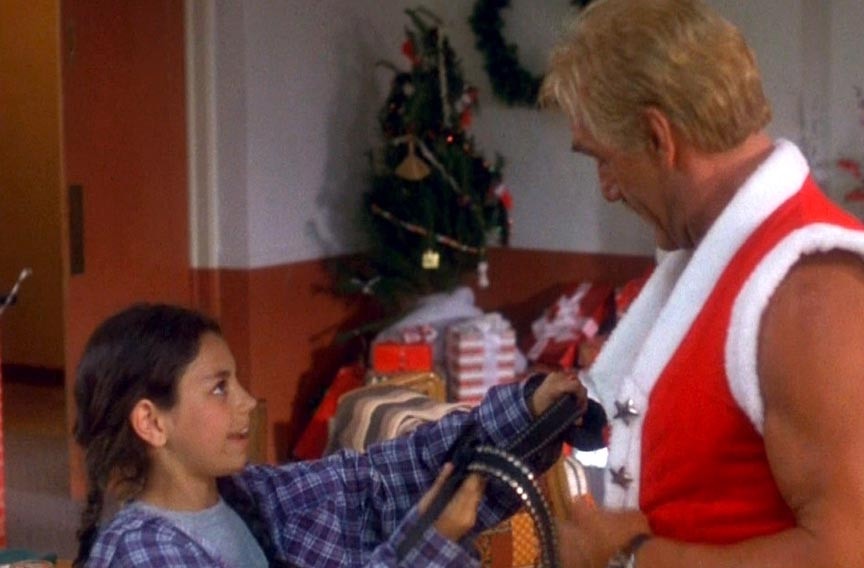 Now let’s get into performances. No one said Dwayne “The Rock” Johnson was the best actor in the world, but Hulk Hogan makes him look like Meryl Streep. A 12 year-old Mila Kunis comprehensively out-acts him, for heaven’s sake. But I have a feeling Hulk was sought after for his draw of wrestling fans and not much else. Even when he makes the change from bratty billionaire to a caring citizen he still isn’t very likable.
But before I completely rag on this film it does have a number of heartwarming (cringeworthy but heartwarming nonetheless) moments. When the kids living at the orphanage say that they’re the ones whom no one wanted to adopt and little orphan Taylor (Adam Wylie) self-deprecatingly calls them “the leftovers,” it was honestly pretty sad. But then you think about what the three remaining kids look like, including this adorable blonde angel pictured below, and then you have no idea how to be possible. Sure Taylor and Sarah (Kunis) are 12+ so I sort of get why no one would want a moody teen, but no one wanted the aforementioned blonde, Elizabeth (Aria Curzon), clearly the sweetest kid in existence? In the dictionary next to “pure” it’s literally just her face. If I needed an innocent to sacrifice to the devil she would have been my first pic. But hey, movie has got to movie.
Also can we talk about how Garrett Morris, of “Saturday Night Live,” “Two Broke Girls,” “The Jamie Foxx Show” and “This Is Us” fame, is obviously a vampire. THIS MAN DOES NOT AGE. 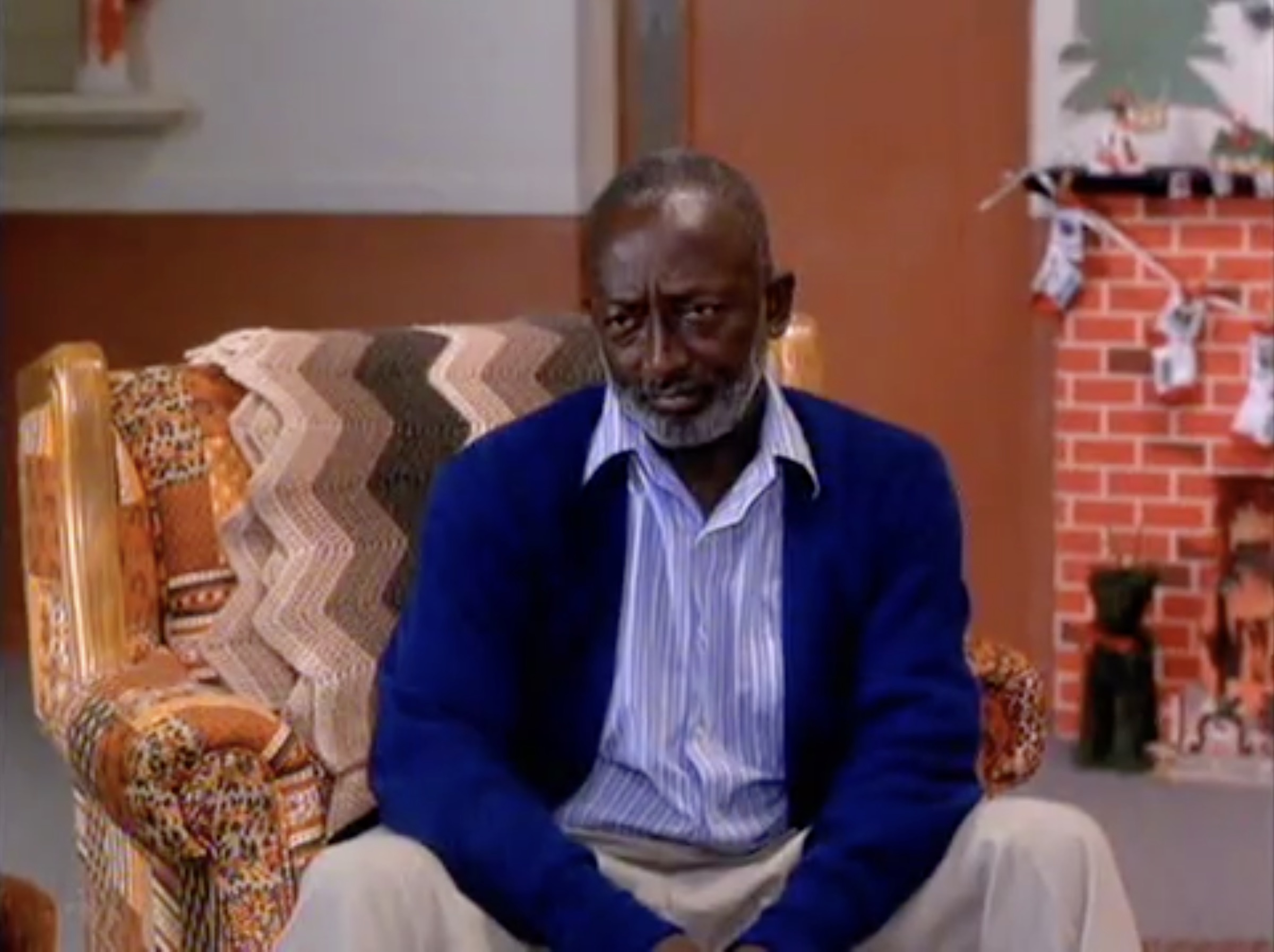 AK: AN ORIGINAL NOT-READY-FOR-PRIMETIME PLAYER on “SNL!” Morris, now 81, looks exactly like he did 22 years ago today. Insane. He’s solid in this, though it feels like he was only available for a two to three days, tops. Then again, if you told me this whole production was filmed in seven days, I’d believe you.
The orphan child plot thread was oddly affecting, I’d agree with that too. It wasn’t… horribly written, and because of that (and the competent professionalism of the three key kiddie actors), it almost worked. The fact that all kids looked like they had appeared in hundreds of commercials and sported market-tested haircuts and attire did spoil the impact of their plight a bit, as did the inferiority of the non-Garrett Morris/Ed Begley Jr. adults they were playing opposite (although they only appear with Begley for two brief scenes during the movie’s climax). Hulk’s wooden line readings before and after his transition from tool to caring adult certainly work against any positive performative touches from the adorable tykes.
I question Hogan’s being a casting target at all for “Santa With Muscles.” Was he here to appeal to wrestling fans? Did locking him in take this project out of turnaround hell and give its makers the clout they needed to lock in its financing and become a “go” project for its producers, the good people at Legacy Releasing and Hit Entertainment? What kind of demographic exactly was his casting intended to lure? Improving on the turnout yielded by “Suburban Commando” might have been the goal here, but that film made a paltry $6.9 million in 1991 money (equivalent to a still-paltry $15 million today). Again, “Santa With Muscles” made $220,198 (a whopping $453,605 in 2018 dollars). By 1996, Hulk’s popularity must have been trending in the wrong direction.
This wasn’t quite as much of a train wreck as I was probably expecting/hoping it to be, but there isn’t much outside of its decent supporting actors that makes it worth even an ironic recommendation here. The overcomplicated, dumb plot machinations are a drag, and the flat cinematography, horrific score and bland production design compound its total lack of visual appeal.
AB: It’s pretty interesting that we look down at those box office numbers. In comparison to contemporary micro indie projects, that tally would be considered a moderate success. It’s only because there are so many big names attached to it that it seems like a complete flop. This is the classic tale of a studio not putting enough money behind a film to give it the chance it deserves. Was it the best script ever written? No. Were the effects, especially that PG torture scene, the worst I’ve ever seen in a movie? Possibly. You could tell they were extremely limited in locations and VFX budget and that definitely hurt them. If they had replaced Hulk with a more competent ripped actor and upped the budget in those spots then they could have at least landed at “decent.”
Besides, with “Jingle All The Way” nipping at the heels of “Santa With Muscles” just two weeks later, it shows you how funny a Santa movie can be with the right team and budget behind it. All in all I feel like “Santa with Muscles” is good for a holiday laugh, but only ironically.
AK: Back in the ’90s, the ceilings for indie movies were generally higher than they are now. Now, grossing a couple hundred grand off, say, a $100,000 budget is a pretty admirable achievement. There are worse ways to spend 107 minutes, but this isn’t quite as much ironic fun as I was hoping it would be. * star for me out of ***.
AB: It’s gonna be a * for me too dawg.