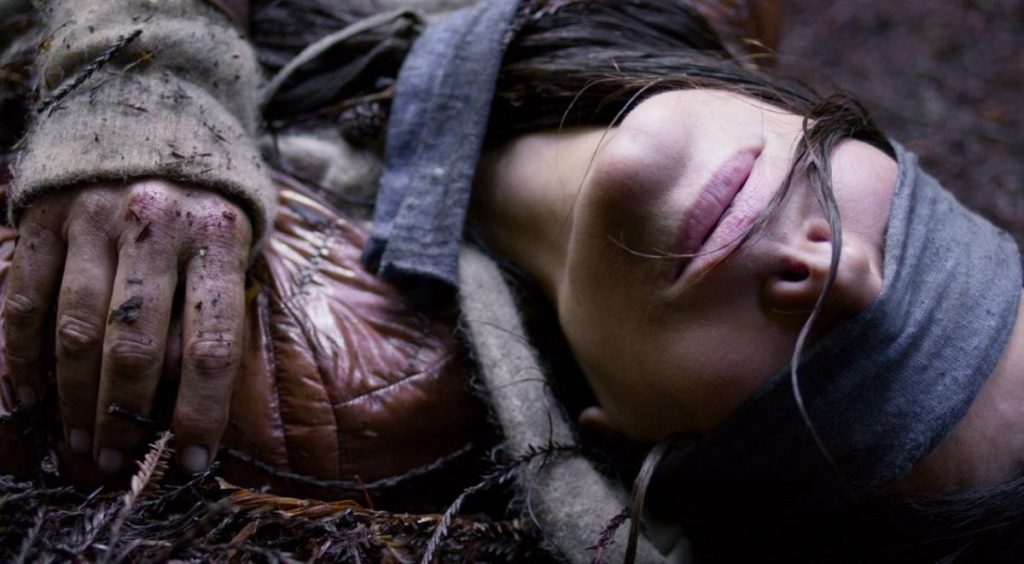 “Bird Box,” a Netflix original film based on a 2014 Josh Malerman novel of the same name, has taken this holiday season and the memernet™ by storm. The movie, directed by Susanne Bier, opens with Malorie (Sandra Bullock), the hardcore matriarch of two children, embarking on a blindfolded journey through treacherous waters with kids in tow. As Malorie shoves the small boat offshore we don’t know what they are running from, but their desperation is palpable.

Flashback. We are met with an unenthusiastically pregnant Malorie embarking on a routine trip to the OBGYN. Malorie is artsy, bitter, and accompanied by her sister (played by the infallible Sarah Paulson). As things at the hospital — and quite frankly humanity — take a turn for the worse, Malorie has to hopelessly watch everyone around her turn into suicidal zombies.

The premise itself is straightforward enough: the world is ending because of an unknown entity and the viewer is predictably left to hunker down alongside a rag-tag group of survivors. The biggest shakeup to the typical post-apocalyptic movie formula here is that this is one thriller where the characters and the viewers are never meant to see the antagonist. Because if “Friday The 13th” taught us anything, it’s that sometimes the evil you can’t see is scarier than the one you can. [Editor’s Note: Some “Friday The 13th” movies are pretty good though, darn it.] And for the characters actually living through this nightmare, seeing the monster means the difference between life and self-inflicted death. 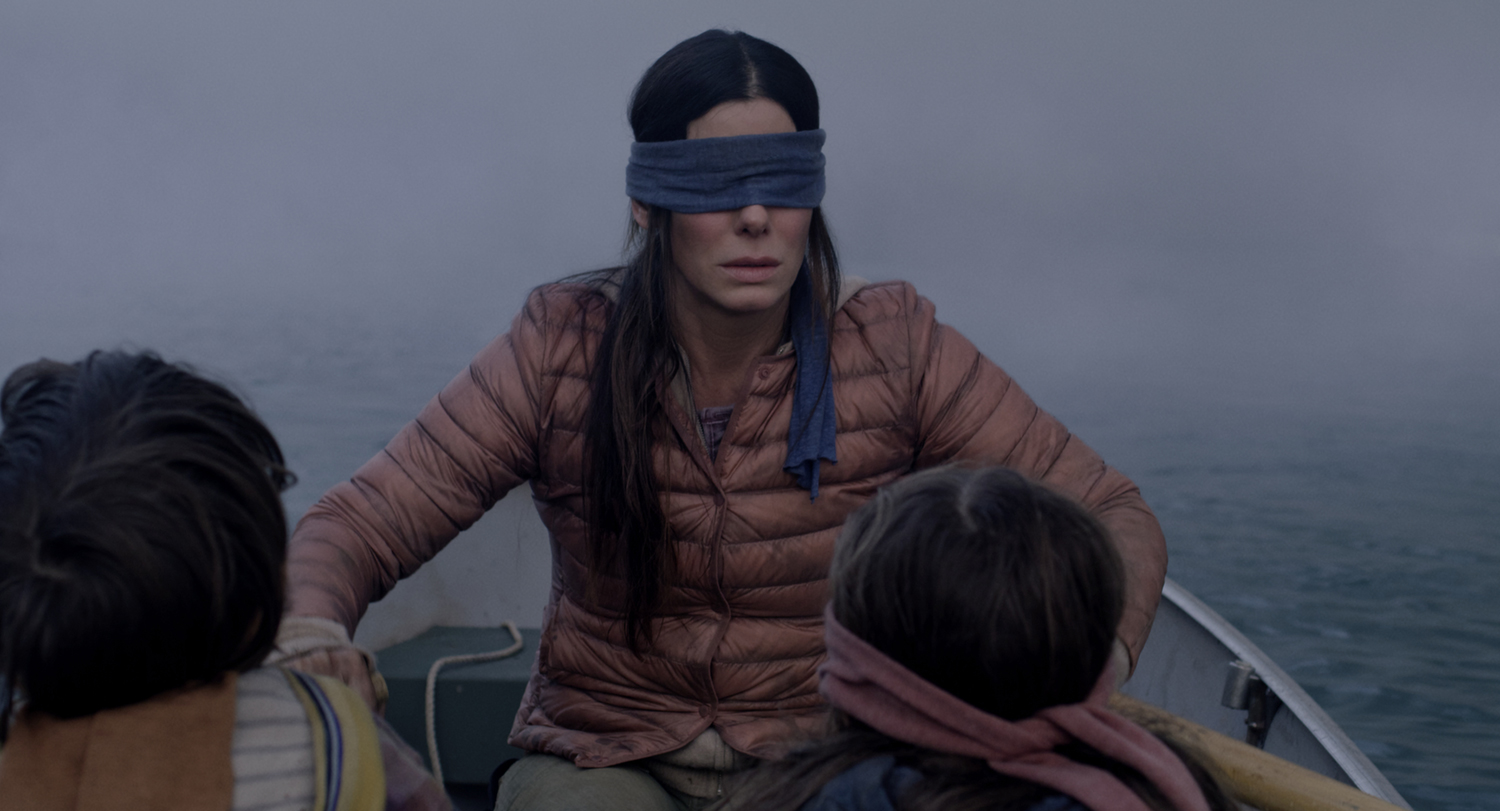 Soon, Malorie finds herself barricaded in a house with other survivors including Trevante Rhodes (“Moonlight”), Lil Rey Howery (“Get Out”), Machine Gun Kelly (rap’s second least favorite white rapper), and the one and only John Malkovich. A few days have passed since the mass suicides at the hospital, and our cast has been able to deduce that you can’t look at the attacking monstrous “presence” directly. But the homeowner, Greg (BD Wong), decides to take a gamble with his home surveillance system. The ole “look in a reflection to avoid the gaze of the monster” trick worked in “Harry Potter” (and “Clash of the Titans”) and when has J.K Rowling’s logic ever been flawed? As frustrated as we may have been with Greg for this obvious lapse in judgment, I think we can be more frustrated with the group for leaving him alone unattended, knowing that his life was literally at risk. Inevitably Greg succumbs to the suicidal allure of the monster and it’s apparent that even viewing it from a screen isn’t safe. 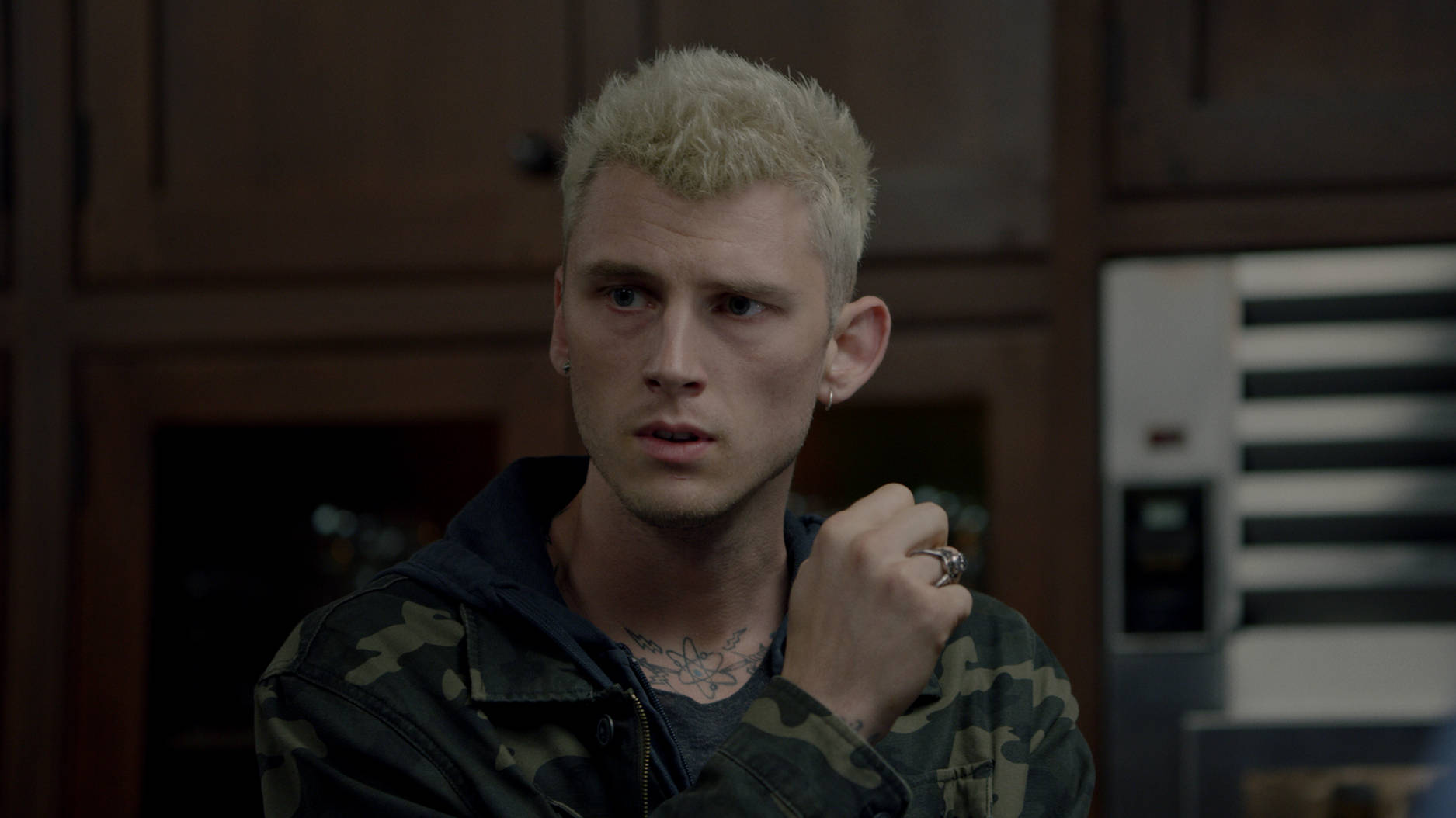 Future “The Dirt” star Machine Gun Kelly makes the cameo America didn’t want, but the one we deserved.

Supplies are running short at the survivor house, so the group decides to make the cliched supply run. These kinds of moments always give writers the opportunity to give us character-building moments while simultaneously killing off extraneous people. Malorie and Tom (Trevante Rhodes) share a touching moment that blatantly sets them up for a tragically doomed relationship. This puts a lot of weight on the chemistry between Rhodes and Bullock especially since they get very few scenes to build a convincing romance, but they pull it off.

“Bird Box” indulges too frequently in plot-spoiling flash forwards. What is often frustrating about this model is when characters from the past are no longer in the present, we can assume they are dead or no longer relevant to the story. It’s practically a spoiler within the movie itself. It eventually becomes clear that the movie only cares about Sandra and her progeny making it to the film’s climax, and sacrifices a lot of storytelling nuance along the way.

But back to the film and to the house. The characters have returned from their supply run and lost a man but gained a tool: birds. Malorie has figured out that the bird’s natural instinct to flee when danger is near makes them the perfect DIY alarm system for when the monster is approaching. But alas! The monster isn’t the only thing our gang needs to look out for. Another lone survivor, Gary (Tom Hollander), stumbles upon their doorstep to warn them of select psychos who are still able to to see the creatures but not automatically resort to suicidal tendencies. Instead, like Phish fans, they insist that everyone must relish in their sight. Despite Douglas’s warnings, the group allows Gary to stay and as the pregnant Malorie and Olympia (Danielle Macdonald) both go into labor, he slips into the background and into his psychosis. Gary looks at his demonic drawings and then charges right into the makeshift delivery room and removes the newspaper shields thus exposing all of them to the sight of the beast. Forcing Olympia and then Cheryl to look at the entity, it seems that Gary has become the very danger he had warned them against. He continues to wreak havoc throughout the house, picking off survivors until Douglas (Malkovich) shoots him. This leaves Douglas, Malorie, and the new infants as the only ones left.

Fast forward five years to the present and Tom and Malorie have been raising the kids out in the woods. Malorie has opted to call the kids “Boy”(Julian Edwards) and “Girl” (Vivien Lyra Blar) for some reason. Malorie has nearly lost all hope of them having any semblance of a normal life and is understandably skeptical when she and Tom hear a voice on their walkie-talkie promising a safe refuge. When their next supply run goes south, Tom sacrifices himself to save Malorie and the kids (nice “A Quiet Place” reference) after he makes her promise to make the trip downstream to the community. 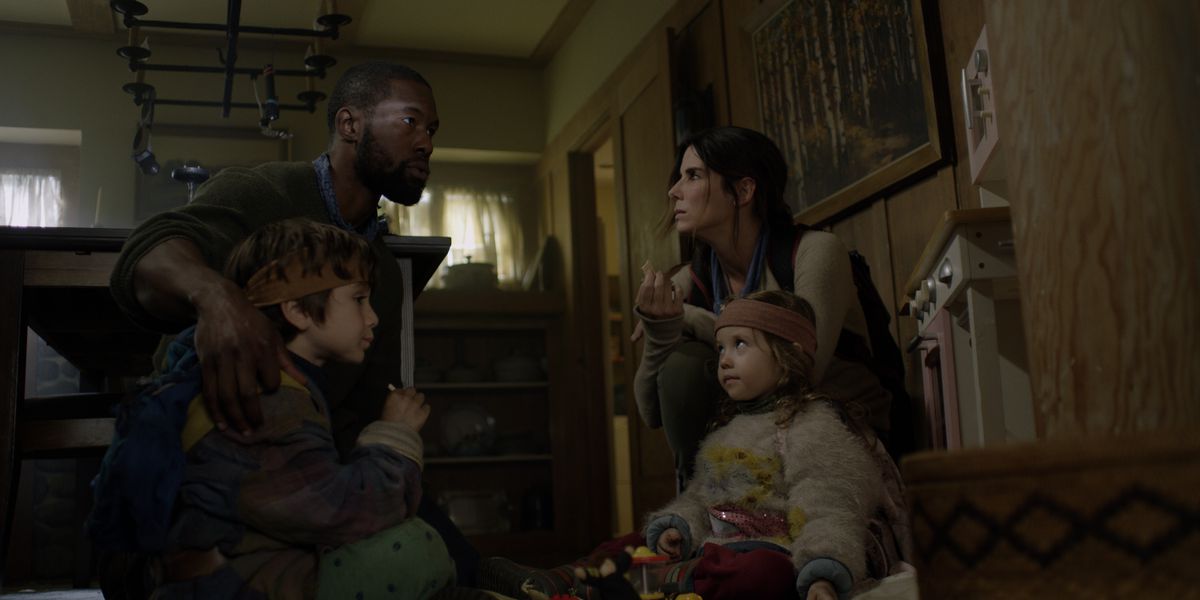 Now the film has at long last caught up to its opening scene — Malorie has embarked on the journey, with the two children blindfolded and armed with their trusty birds in a box (roll credits!). They manage to survive 90% of the journey before facing the toughest part of their journey: the rapids. The voice they heard earlier on the radio had insisted that one person will have to look to ensure they can steer to safety, but of course, that lookout person would perish. Malorie reasons that one of the kids must look, because if she goes down, well, no one will make it. Anticlimactically, Malorie decides that they should all keep their blindfolds on and let the chips fall where they may.

Ultimately the film wraps up rather predictably. Malorie and the kids make it to the sanctuary, which turns out to be a home for the blind. Naturally, the blind who live there are unaffected by the demon sight, while nearby birds warn others who can see when danger is approaching. Feeling finally safe and at peak character development, Malorie decides to at last accept her role as “Mother” (after five years!) and name the kids Olympia and Tom after her fallen comrades (despite Olympia requesting that her daughter be named after a Disney princess). They then symbolically and literally release their birds from their box.

#Birdbox
Olympia: I want to name her Ariel, Jasmine, or Cinderella

Malorie: Your name is Olympia

Olympia up in heaven: pic.twitter.com/pTAyLc5OPz

“Bird Box” does unapologetically indulge in a few classic horror movie tropes (and bears more than a passing resemblance to this past spring’s “A Quiet Place”) but definitely delivers some solid scares and heartwarming moments to boot. Despite a stacked cast, decent production value, and social feed domination, “Bird Box” still couldn’t escape underwhelming reviews on Rotten Tomatoes (65%) and Metacritic (50%). A big part of this may have been due to the guidance of director Susanne Bier, who isn’t exactly known for horror flicks. Her biggest title is “In a Better World,” the family drama that won a 2010 Best Foreign Language Film Oscar. Ultimately, “Bird Box” may not be a storytelling home run, but with so many mysteries unsolved and memes left to create, there is undoubtedly plenty of content in this universe to justify a sequel.