Note: Spoilers abound throughout this review. You have been warned.

Based on the novel of the same name by Richard Wright, the new HBO film “Native Son” tells the story of a Black Chicagoan as he navigates through life after the passing of his father. The protagonist, Bigger Thomas (a.k.a. “Big”), played by Ashton Sanders (“Moonlight”) dreams of an existence as flowery as the books he reads – a James Baldwin-esque utopia where Big is no longer held back by the color of his skin or family’s tax bracket. After a drug-fueled party at his new lucrative job leads to a horrifying accident, that dream begins to fade further and further away.

The film begins with Big as he goes through his usual daily routine of smoking, bike messaging and musing in his friend and sometimes drug dealer’s car. Like many things in his life, Big likes to mix business with pleasure. This vignette may feel a bit mundane but it reveals a lot about Big’s character. It is as Richard Wright himself says, “Men can starve from a lack of self-realization as much as they can from a lack of bread.” And that is essentially Big’s (ahem) biggest character flaw. He is insistent that he is meant for bigger things, but lacks the self-discipline to set much less achieve these aspirations. When Big is grandfathered in a job as a driver for one of the most affluent and influential men in Chicago, it seemed to be out his way out of the pit of poverty. However, Big’s inability to avoid temptations leads to a dizzying night that becomes a catalyst for his ultimate descent. 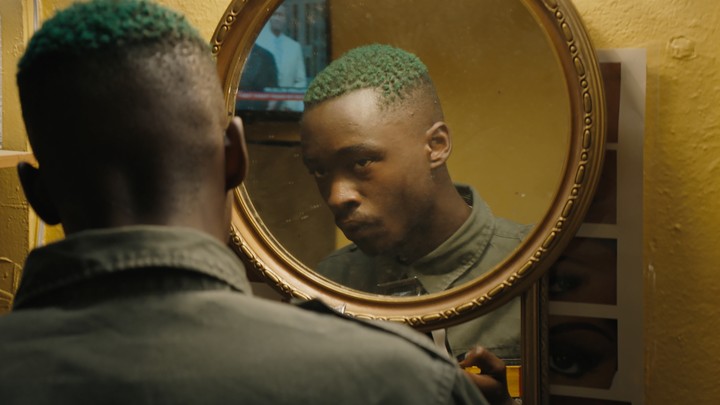 Big admires himself in his bathroom mirror.

Big’s fall from grace began with the crumbling of his curated persona. Donning black nails, green hair, and proudly flexing his “elementary” knowledge of Beethoven, he’s too concerned with his appearance of individuality to actually spend time cultivating it. That’s because Big often doesn’t have to. His act of enlightenment may fool his less privileged peers, but his facade is quickly exposed by his rich employer’s daughter, Mary. She is one of the three women in the film whose interactions with Big reveal more and more cracks in his exterior. And, despite the film’s persistence on reducing women in the story to being Big’s personal cheerleaders or ticking protagonist bombs, Big is, in fact, his own worse enemy. They are merely the mirror being held up to his internally-flawed reflection.

It’s a shame that the film doesn’t do a better job of exploring Big’s shortcomings in a substantial way. Instead, it is insistent that he is the blameless victim caught in the trappings of poverty and circumstance. It is the implied cycle that because one is disadvantaged due to circumstance and thus forces people in those situations to react out of desperation rather than calculation. Or the classic trappings of those with wealth being blind to the sufferings of those they employ and therefore unknowingly exploit them. But this doesn’t really apply to Big or any of the characters that surround him. Consistently they show us that although Big’s family may be a single parent household, the matriarch, Trudy, is a present and supportive parent. Mr. Dalton’s status and appearance may scream yacht club republican, but he vouches for Big on several occasions when he doesn’t have to. Even Mr.Dalton’s daughter, Mary, who has every reason to be the cliche debutant, the she-wolf that lure’s Big into the woods to be devoured by the pack, proves to be considerate and advocates for political change that would benefit people just like Big. Unfortunately, the script is insistent on downplaying the complexities of each of these characters and is insistent upon trying to convince us that they are the foil characters that they are not.

Repeatedly the actors struggle to blend depth into the actors they are portraying but sadly they are only mediums for the screenplay. Sanders does his best to lend dimensionality to Big’s character, he remains incredibly unlikeable. This could be due to the guidance of the film’s director Rashid Johnson, but despite some of the actor’s performances, it’s clear that Suzan-Lori Parks, nor the source material,  has done them any favors here. Condemned to dead-end character arcs and clunky writing, Big’s narrated musings throughout the film feel less poetic and more like someone who has read too many Aldous Huxley novels. Just like Big, this film wants to feel like it has made the biggest revelations without actually doing any groundwork.

“Native Son” undeniably boasts some powerful moments, mostly thanks to the solid camerawork of cinematographer Matthew Libatique. Libatique, who also shot “Black Swan” and “Requiem for a Dream,” has a proven track record for delivering gripping compositions. The true depth of “Native Son” seems to stop there. Big’s wishful thinking never amounts to anything — not because society truly robbed him of an opportunity to grow, but because he squandered an opportunity to better himself. In many ways, by victimizing Big, “Native Son” distracts from actual victims like of police brutality like Freddie Gray and Sandra Bland. In no way is this a condolence of police shooting unarmed black bodies, but choosing that as the vehicle for Big’s ultimate demise weakened a film that already didn’t have much of a leg to stand on.