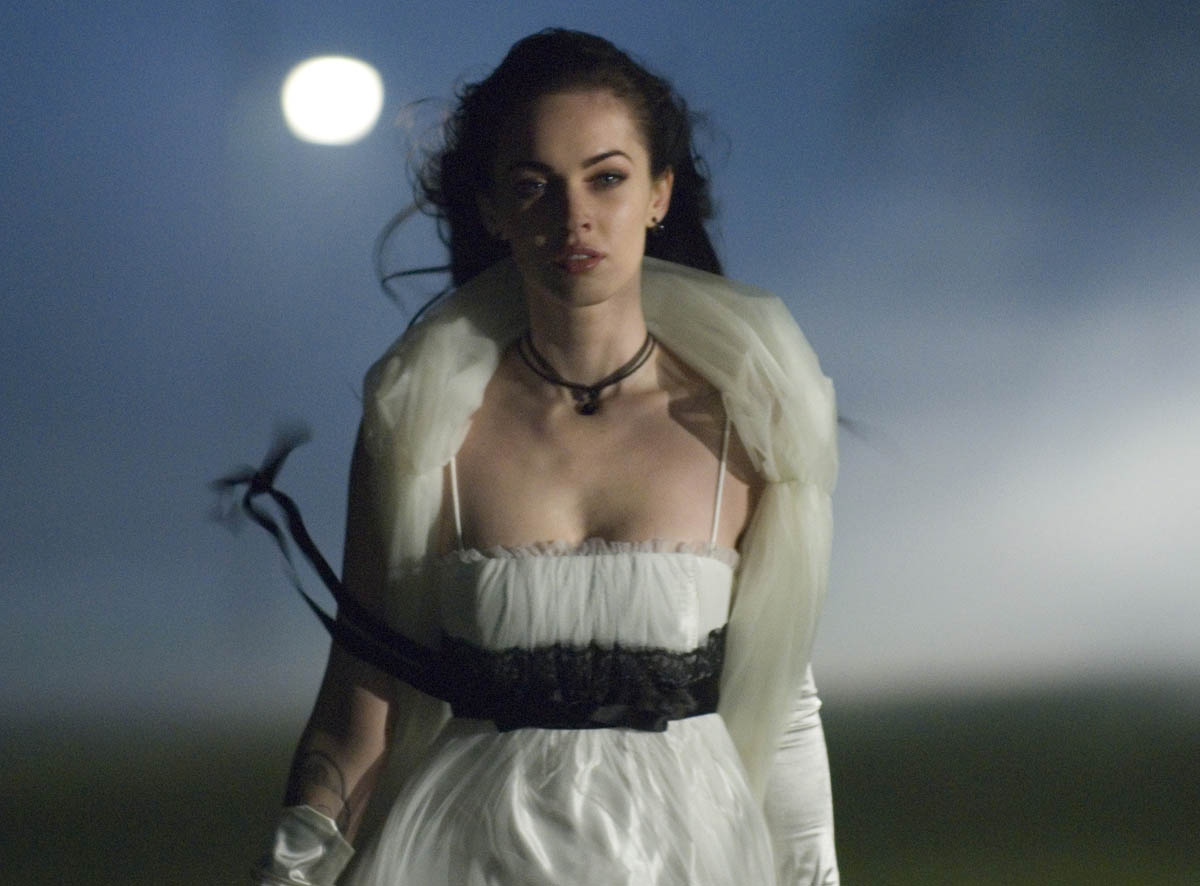 On September 18th, 2009, the Megan Fox-Amanda Seyfried horror comedy “Jennifer’s Body,” directed by Karyn Kusama (“Girlfight,” “Destroyer”) and written by Diablo Cody (“Juno,” “Young Adult”), was unleashed upon an unsuspecting audience. Critics and audiences alike lamely shrugged their collective shoulders, and it quickly disappeared from theaters after posting disappointing box office returns. The film, released by Fox’s then-genre subsidiary Fox Atomic and budgeted at a cost-effective $16 million, made just $31.6 million internationally. But, as so often unjustly happens with smaller flicks, the people were wrong. This was a special movie. Filmcore is not alone in this opinion. Ten years later, Filmcore’s crack team of Emily NS and Alex Kirschenbaum investigates why — ten reasons why, in fact. Happy Halloween.

The plot (spoilers abound): Emo band Low Shoulder, fronted by Nikolai Wolf (Adam Brody), travel to the small, isolated town of Devil’s Kettle, Minnesota, in search of virgin flesh. They find cheerleader Jennifer Check (Megan Fox) and her best friend, studious Anita “Needy” Lesnicki (Amanda Seyfried), destroy their concert venue with some covert arson, and abduct Jennifer. Thinking Jennifer’s a virgin, they sacrifice her in a tribute to Satan, a move designed to ensure their popularity. Unfortunately, because Jennifer has not been a virgin since junior high school according to Anita, she arises from the dead with demonic powers. Suddenly, Jennifer can sprout fangs, she can float (though she can’t quite fly), she can read certain thoughts, she can heal from all non-cardiac injuries, and, oh yeah, she derives her superhuman strength from a steady diet of teenage boys. Anita eventually resolves to take down Jennifer, but unfortunately, her boyfriend Chip (Johnny Simmons) marks Jennifer’s final meal. Though Anita does succeed eventually in destroying her demonically-resurrected best friend, she is caught red-handed by Jennifer’s mother (Carrie Genzel) and imprisoned in a psych ward.

–ENS: The film sports lots of gruesome, campy comedy-horror that recalls Sam Raimi, replete with quick sharp editing. It reminds me of “Drag Me To Hell,” which not so coincidentally came out the same year. Goof-horror (is that a genre?) was definitely making a comeback that year (see: “Zombieland”).

–AK: “Jennifer’s Body” is a movie about female friendship, albeit an unhealthy female friendship. But it’s cool to see this element covered and explored in such a thorough way, even through the lens of a campy horror extravaganza.

–ENS: The “sensitive” indie emo boys are not spared penance here. This movie’s ahead of its time. Back then, #MeToo wasn’t even a shadow of a thought. Then, it became something we only applied to football quarterback-types or your standard alpha male. Very refreshing to see.

–AK: “Jennifer’s Body” is a great horror movie, built off two charismatic stars, a funny script that’s equal parts “Heathers” and “Fright Night” (with an invariable touch of “Juno” sprinkled in for good measure), and an energetic visual flourish full of movement and action.

–ENS: “Move-on-dot-org, Needy” continues to be an immortal retort. Probably my favorite line.

–AK: The film, though certainly a horror comedy, is fairly dark and nihilistic — Anita, a spirited and smart high school student with a lot of promise, goes insane (and inherits some of Jennifer’s powers, albeit sans a desire to eat boys) after killing her best friend in service of a doomed effort to save her boyfriend Chip. In 2019, we’re apparently stuck in the darkest timeline of reality, so… it’s a good fit.

–ENS: The final confrontation between Needy and Jennifer remains terrific. There’s a statement here: Jennifer is watching a workout video as she falls asleep right before Needy comes to end her killing spree by well, killing her. She looks at the video forlornly, watching a woman gaze and laugh almost maniacally at a buff, greased-up Tony Little yelling about butts. It’s right after Needy destroys her clearly fragile ego by reminding her she needs to take laxatives to stay skinny.

–AK: So many horror movies end right after the villain is vanquished, but before our heroes (who frequently have to bend or break the rules to save the day) have to defend their actions. “Jennifer’s Body” wonderfully, tragically bucks this trend, which makes it even more powerful a decade later. In the movie’s bleak resolution following the confrontation, Anita has been implicated and incarcerated for Jennifer’s murder. Granted, Needy is able to use some freshly-acquired superhuman powers to escape her constraints and wreak her own brand of supernatural havoc on Low Shoulder. But Needy’s professional future has probably been doomed by her criminality. She will never have a normal life. This treatment very pragmatically addresses the typically unseen, invariably messy aftermaths of supernatural horror movies, where the supernatural circumstances that should vindicate surviving protagonists would become very hard for our heroes to tangibly prove.