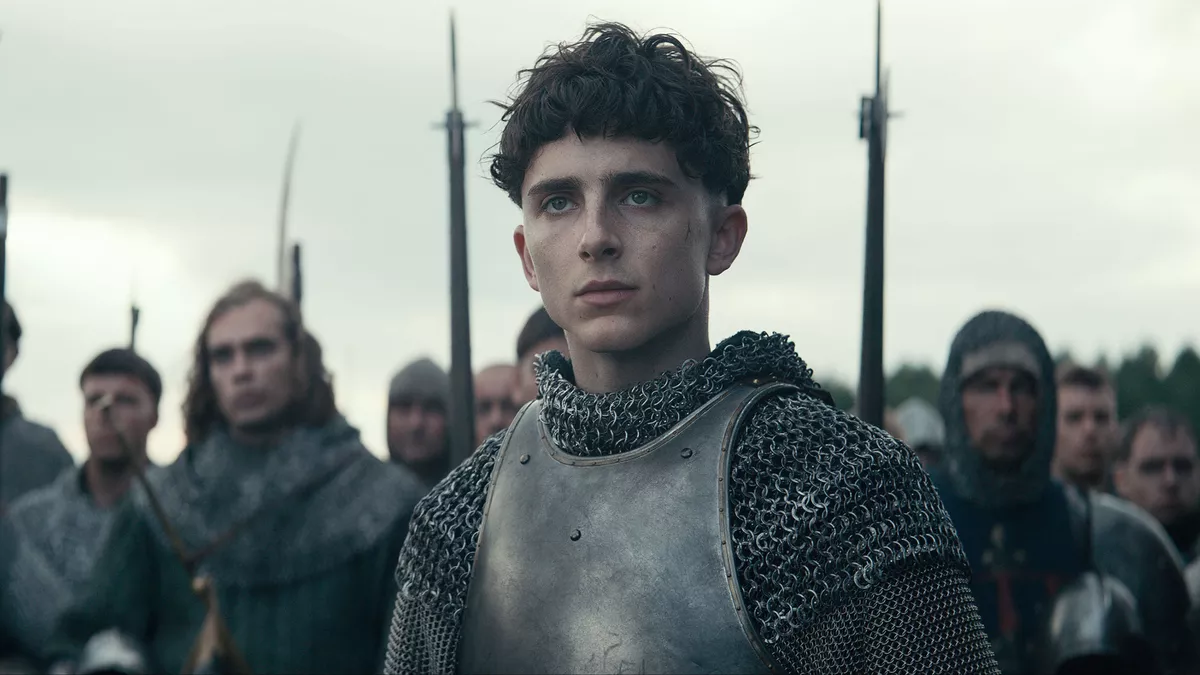 Filmcore critics Armani Barron and Alex Kirschenbaum go medieval on Netflix’s “The King” in the latest Critical Exchangecore. In the film, directed by David Michod and written by Michod and co-star/co-producer Joel Edgerton, we follow Hal (played by “Call Me By Your Name” breakout star Timothee Chalamet), the classic prince bad boy with an affluenza affliction. Though wholly uninterested and undeserving of the English throne, he soon finds the crown thrust upon him after the deaths of his war hawk younger brother, Thomas (Dean-Charles Chapman), and his father, King Henry IV (Ben Mendelsohn). Now rechristened King Henry V, Hal must navigate the literal game of thrones that has become his life.

Armani: First thoughts, this is a beautifully shot film. Adam Arkapaw, the Director of Photography behind “True Detective” Season 1 and “Top Of The Lake,” masterfully navigates between intimately lit dinners and sweeping battle sequences. However, a well-composed scene can’t make up for the dialogue in it. I felt that the actors worked their way through the dizzying dialogue but I found the superfluous fancy wordplay often unnecessary, and a condition that made the occasional F-bombs even more jarring than they otherwise would have been. Screenwriters try to make historical source material more approachable by modernizing the vernacular used by people at the time, but often I find they go to far. I feel like “Marie Antoinette” (2006) actually did a great job of balancing this, but “The King” falls short, except for an intriguing final scene with Lily-Rose Depp.

One big thing I wanted to applaud was the lack of nudity. It seems like the most they did with that R rating was spilt on the battlefield and they left the low hanging fruit that is scantily clad chambermaids on the branch.

Alex: This was abject trash. Yes, it was pretty trash, and yes, it was well-cast trash. And, fine, there wasn’t a lot of nudity. But that doesn’t excuse the utter joyless slog that was this painfully boring narrative mess. I could have seen this coming, having deeply loathed Michod and Edgerton’s prior collaboration with Robert Pattinson, “The Rover.” Pattinson, who played a mentally handicapped person in “The Rover,” here plays the imbecilic French prince Louis, Duke of Guyenne. Just as in “The Rover,” he is prone to pseudo-inaudible mumbling throughout the film, though his glowering skills are solid. Armani, I would concur with you that most of the dialogue that was audible felt like an uncomfortable mix of modern and medieval.

Timothee Chalamet, the pretty but vacant star of this nonsense, also possesses excellent staring skills. But he isn’t given a whole lot else to do here. His character starts life here as a bored, disaffected, sex and booze-crazed pacifist who hates his dad. As soon as his dad passes, a lackluster assassination attempt is staged and Henry V immediately changes tacts, becoming a brutal warmonger who wants to eviscerate the French. It turns out (spoilers, but also who cares?) that the “assassination” attempt was staged by a bloodthirsty advisor (Sean Harris) with designs on dominating France. These are some major, major character pivots, and yet almost no change is registered on Chalamet’s face. Yes, he sometimes yells. But he’s pretty much always raging against some kind of machine. He never even seems mildly competent at his job, essentially happy to follow the advice of the Edgerton character, fallen knight Falstaff, or the duplicitous Harris character, William.

Why are we supposed to care about any of this stuff when our hero doesn’t seem to? There are three significant character shifts that the movie barely addresses, choosing instead to linger on under-lit frames of people glaring at each other. The undercooked script and understated acting, plus some overstuffed, under-edited and under-lit sequencing, killed this thing for me.

Armani: It has been pretty apparent that Netflix has really been cementing itself as a staple in the feature-length space, but it’s not only for entertainment purposes (see “Birdbox”), but for genuine Academy Award grabs. Before the film’s release, it was obvious that Netflix was pushing this piece around the festival circuit, placing a lot of their chips on Chalamet’s performance. I’m not sure if this is going to get the kind of award nods that they were hoping for, actually I’m pretty sure it won’t be getting any (for performances at least), but it’s reassuring to know that Netflix is still game to take a gamble on more niche dramas and content.

It is a bit worrying that they seemed more concerned with glam and star power than a compelling script. The story itself is pretty insane, a young English king united all of France and England in a single battle, yet it never feels as important as it should.

Alex: I agree! Chalamet’s disaffected take on Henry V effectively disengages us from caring about that long, extended battle against the petulant Pattinson prince. On the one hand, I will concede that it’s nice to see Netflix affording creators apparent carte blanche for esoteric dramatic projects with significant budgets (this movie would have gotten a big-screen, 3500-theater domestic release with talents of a similar level even a decade ago). On the other, maybe a little creative oversight could have helped! Armani, what would you rate this out of the four-star scale? I would award this * 1/2 out of **** stars.

Armani: I mean this movie is just really proving the point that as the battle of the streaming services rages on, they are just going to keep pumping out premium content. Even if it’s just a glossy hollow shell. I’d give this one a * 3/4 out of **** stars. I wouldn’t recommend to a friend, but I respect the cast and crew enough to acknowledge its existence. Even if the screenwriters didn’t.