Warning: Spoilers are present this time, so read at your own peril.

“The Hateful Eight” isn’t quite about justice, nor is it quite about revenge. It’s not really about race, although the “n” word is dropped about a hundred times. It’s violent, but none of the violence is terribly satisfying, as Tarantino’s playful brand of gore can be. And while Tarantino delivers some twists and build-ups of suspense, the twists aren’t as surprising and the breakdowns aren’t very relishable. This lack of thorough satisfaction may be due to the dearth of a good or pure soul in the movie (yep, everyone’s pretty damn hateful). When these people are killed, you don’t celebrate–but you also don’t despair. Of course, morally ambiguous characters are commonplace in stories, usually the greatest ones, and in almost every single one of Tarantino’s films. The main reason why “The Hateful Eight”is a good story–and not a great one–is, I’ve decided, due to one thing: overindulgence. 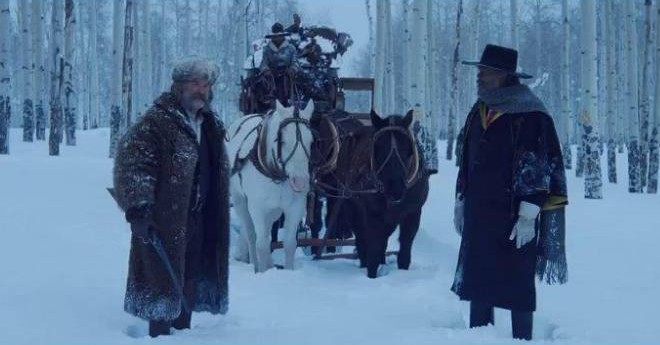 But, as my friend and fellow nerd Tyler O’Neill has said, overindulgence is Tarantino’s meal ticket. This has been reiterated by many over the years. The man indulges, certainly–but when the story is truly captivating and multifaceted (e.g. “Inglorious Basterds”) or darkly hilarious (“Pulp Fiction”), all the blood and guts feel more deserved.

Opening the story is the image of good ol’ Jesus up on the cross, half-covered in snow and looking very lonely in the wintry Wyoming countryside (the story itself is set in Reconstruction-era Colorado). The isolated Christ most certainly portends a fateful series of events, which unfold as a direct result of each character being sinful in their own way. First, there’s John Ruth (Kurt Russell), a bearded bounty hunter, Marquis Warren (Samuel L. Jackson); a second bearded bounty hunter, with three corpses in tow; and Ruth’s bounty-du-jour, Daisy Domergue (Jennifer Jason Leigh), also the target of his merciless, sexist violence. It’s a tense situation, since Ruth doesn’t quite know whether to trust Warren, who he comes across in the middle of a blizzard and takes into his carriage. (Here’s where the n-word is first dropped, and this is the only moment when Warren actually pushes back on it.) After some discussion, the three (plus John Ruth’s driver, O.B. Jackson, played by James Marks) leave together en route to Red Rock, but the plan is to first stop into Minnie’s Haberdashery, a lodge for stagecoach travelers. The three soon becomes four when yet another lost, cold soul, Chris Dannix (Walton Goggins), claiming to be a sheriff of nearby Red Rock, is skeptically welcomed into the horse-drawn vehicle.

As a compulsive symbol-seeker in film, I found it hard to ignore the slow-mo shot of one black and one white horse hauling the carriage through the snowstorm, which is Tarantino’s way of not-so-subtly saying that racial unity is an upcoming theme. However, this theme is illustrated in a mostly confusing way. After an inevitable shootout, Lost-Causer Chris Dannix and Marquis Warren become an unlikely duo, pitted against a blood-soaked Daisy Domergue, who looks like a demon before her brutal death. It’s not by design that they come together, but more by each depraved man’s self-interests as they happen to coincide. What statement Tarantino is trying to make isn’t clear, even though he has said in interviews that the film is “about” white supremacy and institutional racism. He trots out the same argument he’s relied on for years–that by including extreme racism in his movies, he’s simply exposing the dark side of the past, and that’s somehow boldly progressive in a way that other “social progressives” aren’t. He’s stated that by using the n-word repeatedly, he’s just being historically accurate. He also claims that people who are uncomfortable with his tactics are just not on his level. Of course, it’s pretty obvious that he’s not supporting white supremacy–Tarantino clearly took a lot of pleasure in writing out Warren’s stomach-churning, over-the-top monologue all about his vicious black revenge. And we know from quasi-historical revenge fantasies “Django Unchained” and “Inglourious Basterds” (that’s how he spells it, remember) that QT deplores racists, portrays them as terrible people, and delivers them justice. But to say Tarantino is doing his part to challenge racism or promote brotherhood–by ultimately showing a near-dead interracial duo of bad guys hanging a “bitch” together–is a dubious argument at best.

Despite its pseudo-commentary, “The Hateful Eight” still boasts a reasonably compelling storyline with fine literary elements. No one knows who the characters really are until it’s ceremoniously revealed, and the sequence and nature of each character’s death is dynamic, if a bit protracted. Before the climax of the movie, there are a few tells that keep us on our collective toes: a bullet casing that has zipped upright on the floor; a stray jellybean rolling out from under a chair. These are just pronounced enough to inform us that something has gone down, and that something else is about to go down. A brief whodunnit involving poisoned coffee titillates viewers who crave a good, Christie-esque mystery (and who may be as addicted to true crime stories as I am). Robert Richardson’s artful cinematography honors the landscape, which despite being covered in snow, is quite stunning. Although to be fair, it’s really hard to make Wyoming look bad. Additionally, this white tempest rages within our players, whether they’re repressing secret realities of their identities, Southern resentment, or black rage. And the concept of utilizing a cabin that’s supposed to be a refuge as a death trap is poetic, as well–the relief that each person feels upon blustering in through the door, “safe” from the elements, is ironic considering their eventual fates by human hands. Still, as I mentioned, there’s not much gratification in these events. The relief you feel when these characters “get theirs” is nothing like what you feel when Christoph Waltz’s evil Nazi colonel is branded with a swastika in “Basterds,” or in “Django,” when Waltz’s Dr. King Schultz tells the loathsome Dicky Speck (James Russo) to “keep his caterwauling down to a minimum” after having shot his horse.

“The Hateful Eight” has the typical “right stuff” for diehard Tarantino lovers–shameless barbarity and a fairly engaging story. Yet it overindulges in the wrong things–like its 2-hour, 47-minute non-road show runtime–while coming up short on genuinely creative intrigue and in-depth analysis of race in America. As a whole, it wants more than it puts out and expects more than it deserves, but Tarantino will stand by it to the death. In a recent interview, Tarantino remarked that in the future, his social critics will be “old men at Thanksgiving…fry[ing] on an egg on their bald pate while their grandkids exalt my virtues.”