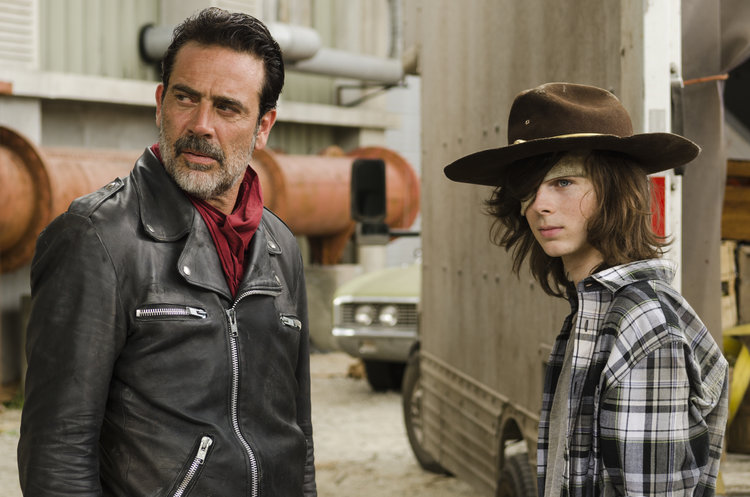 In last Sunday’s episode of “The Walking Dead,” as Rick & Co. scavenged for supplies, we got a closer look at The Saviors (and Carl’s eye hole). Let’s break down “Sing Me A Song,” shall we?

This whole thing is dumb and insists on getting dumber. At the opening of the episode, we see Michonne back at the pile of burned mattresses. We know that she is still on her “vengeance against The Saviors” arc, but to be honest I’m over it already. As she begins luring biters into the road and slicing them up I immediately feel like this is a bad idea. One, because it’s going to be obvious that Michonne is the one killing all of these walkers on the road, as not that many people are wielding samurai swords. Two, it’s going to be pretty obvious someone is either trying to send a message to The Saviors or trying to find their camp, and we know they don’t take threats idly.

Well as we find out, Michonne doesn’t plan to just threaten, she’s ready to put her sword where Negan’s mouth is. She creates a walker road block and waits for one of Negan’s lackeys to attempt to drive by. When a red-headed woman takes the bait, Michonne quickly instructs her to “take her to Negan.” I’m pretty sure that this isn’t going to end well for either of them. I’m sure The Saviors have a protocol in place for this sort of thing, and the Red-Head isn’t going to actually take Michonne back to home base. Once Michonne figures out that she is being duped, it’s lights out for Annie the Savior.

Sidenote — I would love to see a walker Pinterest page… like all the DIY things you can do with the biters roaming around.

Much to our relief, Negan seems genuinely excited that has Carl shown up and proceeds to give us probably the most messed up episode of MTV Cribs ever. As soon as they enter the compound, Negan gleefully demonstrates his control over his subjects. “Everyone gets fresh vegetables tonight… no points needed!” he exclaims to his kneeling followers. Carl is visibly impressed, or at least his remaining eye is. This style of leadership definitely sits in stark contrast to Rick’s democracy at The Safe Zone.

Negan continues to give Carl a tour of the compound and his power. He forces Dwight to watch him kiss (uh… whatever Dwight’s ex-wife’s name is) and makes fun of Carl when he takes his eyepatch off. Negan insists that people like it when he busts their balls, but really everyone is just too afraid to tell Negan how unfunny he is. It’s like when your boss cracks a joke at the office — and sure, Keith sucks, but you still have rent and a Hulu subscription to pay off. It’s also hard to stand up to a guy burning people’s faces off with an iron. It’s pretty clear that everyone carries alot of disdain for Negan, but as he put it, he is the one making the world inhabitable again.

Now The Savior’s philosophy is actually pretty interesting. Negan claims that they are bringing civilization back, and in an extremely violent way they are. They have created a network of resources and civilizations that can operate autonomously while The Saviors continue to conquer. In reality, Negan’s conquest is similar to that of other rulers such as Genghis Khan or Augustus Caesar.  To lead a pack of wolves, you have to be a wolf yourself. Everyone is always ready to challenge the Alpha (as we see with Rick and Spencer) and loss of dominance is only a misstep away. Negan is fully aware of how much his control relies on people believing he actually has the power to control them.  However, it’s safer and more comfortable to just go with the herd. There is safety in numbers, and until each one of The Saviors (or at least the majority) turns, it’s best to lie low.

YOU ONLY GET ONE SHOT

Meanwhile, back at band camp, Eugene and Rosita are on a secret single-bullet making mission. At first, Eugene is reluctant because let’s face it, one bullet ain’t gonna do shit. The repercussions of Rosita making an attempt on Negan’s life and failing will be dire. What’s worse, the price of insubordination won’t be paid by her, but by someone who probably doesn’t deserve it. My prediction is that Rosita will shoot, miss, and be forced to become one of Negan’s wives.

When Daryl spots Carl with Negan, he is visibly upset and even threatens Negan directly. Negan scoffs and has Dwight put Daryl “back into his box”. It’s really

frustrating that Daryl hasn’t learned to play nice yet. By now I really hoped he would be of better use as an inside man, not as a problem dog. After he gets put back in his room/cell/cupboard under the stairs someone mysteriously shoves a key under his door with a note that says “GO NOW.” I can’t tell if this is a trap or a sincere attempt to help him escape. Either way I don’t think Daryl will get far…at least, not without the help of either Jesus or another Savior.

Spencer and Father Gabriel set out on a scavenging expedition. I’m not sure if it’s Father Gabriel’s priest status or his soothing Ben Carson-esque voice, but Spencer opens up about his hatred of Rick to him. He believes that Rick is the whole reason why everything went south in Alexandria, and thinks that he could do a better job of running Alexandria. Honestly, nothing qualifies him for the position besides a solidly square jaw line. As he confesses this, he fully expects Faja Gabe to agree with him and excuse him of his sinful thoughts. But much to his dismay Father Gabriel dissents.

This whole #ThanksRick campaign that Spencer has been touting around is extremely annoying. Father Gabriel explains how Rick brings out the survivor in people and is the reason why any of them are still alive. Besides, blaming other people for your problems isn’t productive, won’t bring your dead friends back, and just makes you a “little shit.” Turned off by Spencer’s comments, Father Gabriel gets out of the car and begins walking back to Alexandria, leaving Spencer to search for supplies on his own.

I was actually hoping that Spencer would return to Alexandria emptyhanded, but of course, the little shit lucks out in discovering the location of a stash of supplies written in Latin. Of course, being the privileged little turd he is, Spencer fortuitously took Latin in whatever prep school he went to. He shows up back at the gates of Alexandria with supplies and a smug grin on his face. The way he sees it, by returning with so many supplies, Negan will surely see that he is more fit to lead Alexandria.

My guess is that Spencer will be the first to go in the mid-season finale. Anyone who isn’t on board with Rick at this point needs to just get off this train.

Next week, it’s clear that we’re in for a rough ride. Rick & Co. are going to come home to Negan babysitting Judith and forcing Olivia to make him lemonade. It’s going to be a harsh reminder that Negan is a serious threat, and one who won’t be able to coexist with the other surivivors.